Your Kid’s Coding Skills Will Leap Ahead with Hopscotch! 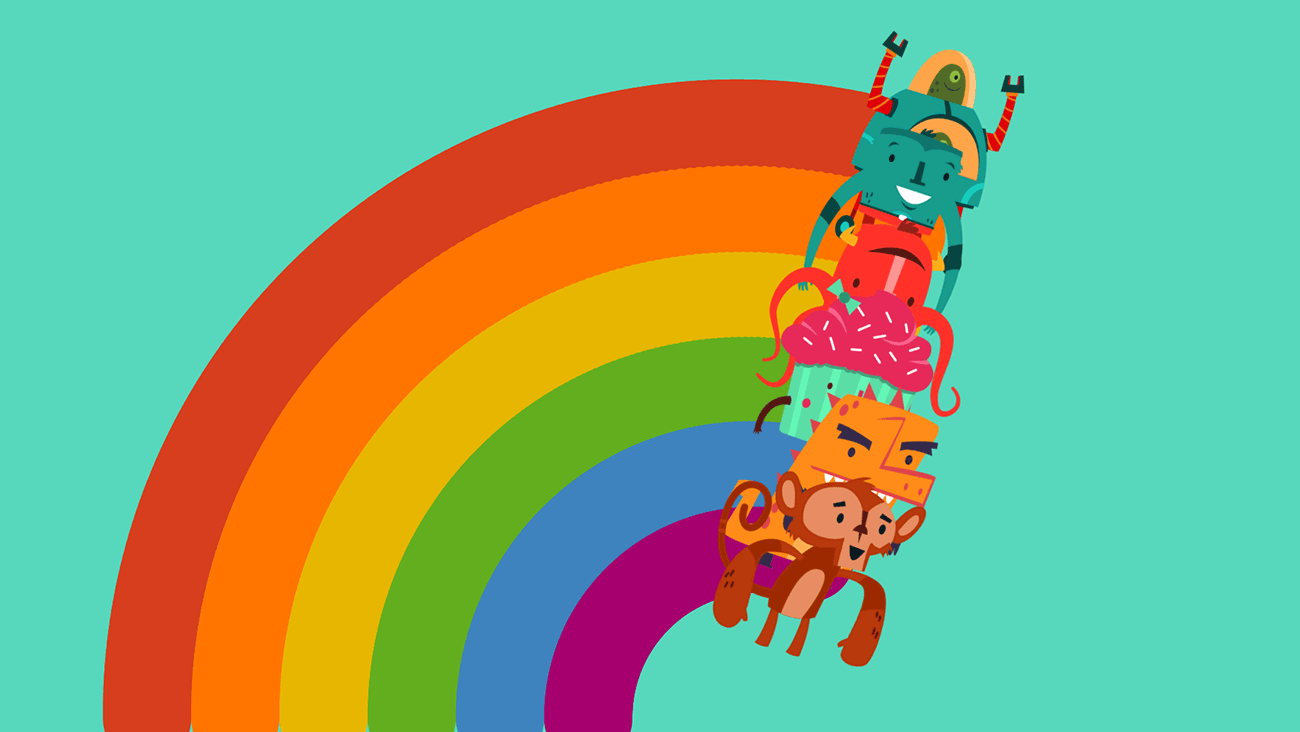 I started programming in the 1970s, when I was eight years old. At the time, that was a very young age to be coding.

In those days, you pretty much had to build your own computer from scratch. Then — if it started up OK — you used the BASIC computer language to write simple programs and games. (If you got really good, you started using assembly to write better games.)

BASIC was a fairly easy language to learn, but it still involved learning lots of strange new statements and commands that you had to type perfectly into the computer. Make a single mistake, and you were greeted with the dreaded ?SYNTAX ERROR message!

Things have come a long way, and these days kids have more opportunities than ever to learn programming. What’s more, there are many apps available that allow your kid to learn coding concepts and write simple programs, without having to wrestle with all those arcane BASIC statements and syntax errors.

One such app is Hopscotch. This is a beautiful, easy-to-use iPad app that your kid can pick up in a matter of minutes. Within an hour, they’ll be creating their first computer programs.

In this article, I’ll show you how you and your kid can get the most from Hopscotch. You’ll get an introduction to Hopscotch, learn some basic programming skills, and explore some example coding projects that your kid can do. By the time you’ve finished reading and your kid has spent some time with Hopscotch, they’ll be well on their way to becoming a coding ninja!

You’ll also explore some other great websites and apps that teach coding skills, as well as some excellent programming books aimed at kids.

Hopscotch is an iPad app that lets you create simple computer programs, known as projects in the app. Rather than having to type lots of lines of text — as you do with traditional computer programming — you create programs in Hopscotch simply by dragging and dropping blocks into place.

As programming tools go, Hopscotch is relatively limited in its abilities; however, that is a good thing, as it keeps things simple enough for even young kids to play with.

While Hopscotch may be fairly basic, you can still create a surprisingly wide range of projects with it, such as:

…and anything else your kid can dream up! 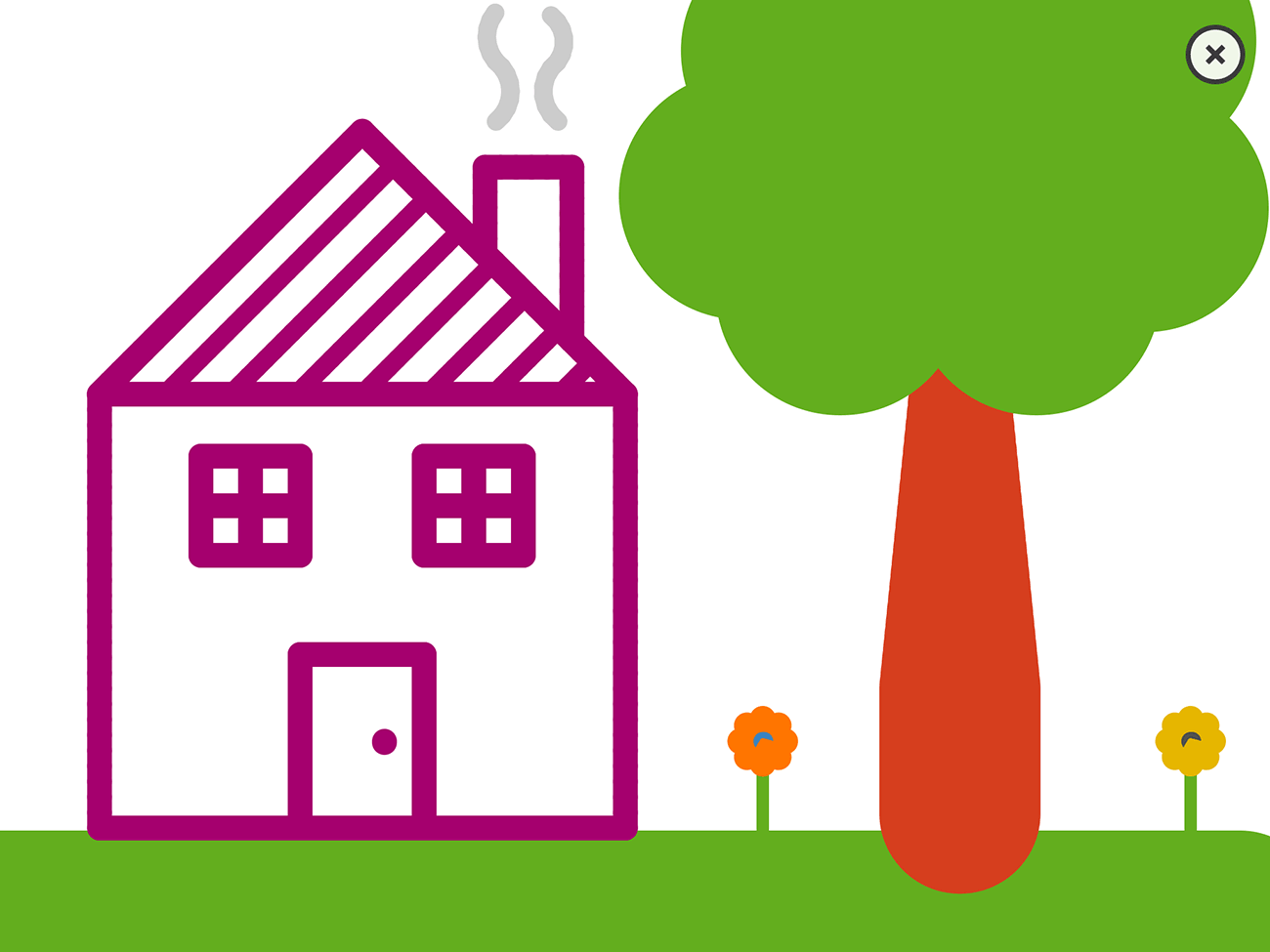 Hopscotch lets your kid use programming to create anything from simple games to pictures and cartoons.

How does Hopscotch work?

The basic idea of Hopscotch is that you add characters to the stage, then add various rules to each character to make it behave in different ways.

Each rule has two parts:

There are many built-in abilities that make a character do fun things, such as “Act like a balloon”, “Break dance” and “Go for a walk”. However, the fun really begins when you start creating your own abilities.

To create an ability, you drag in blocks from a palette. Each block is a simple instruction that you want the character to carry out, such as “Move forward a certain number of pixels”, “Rotate a certain number of degrees”, or “Grow by so many percent”. 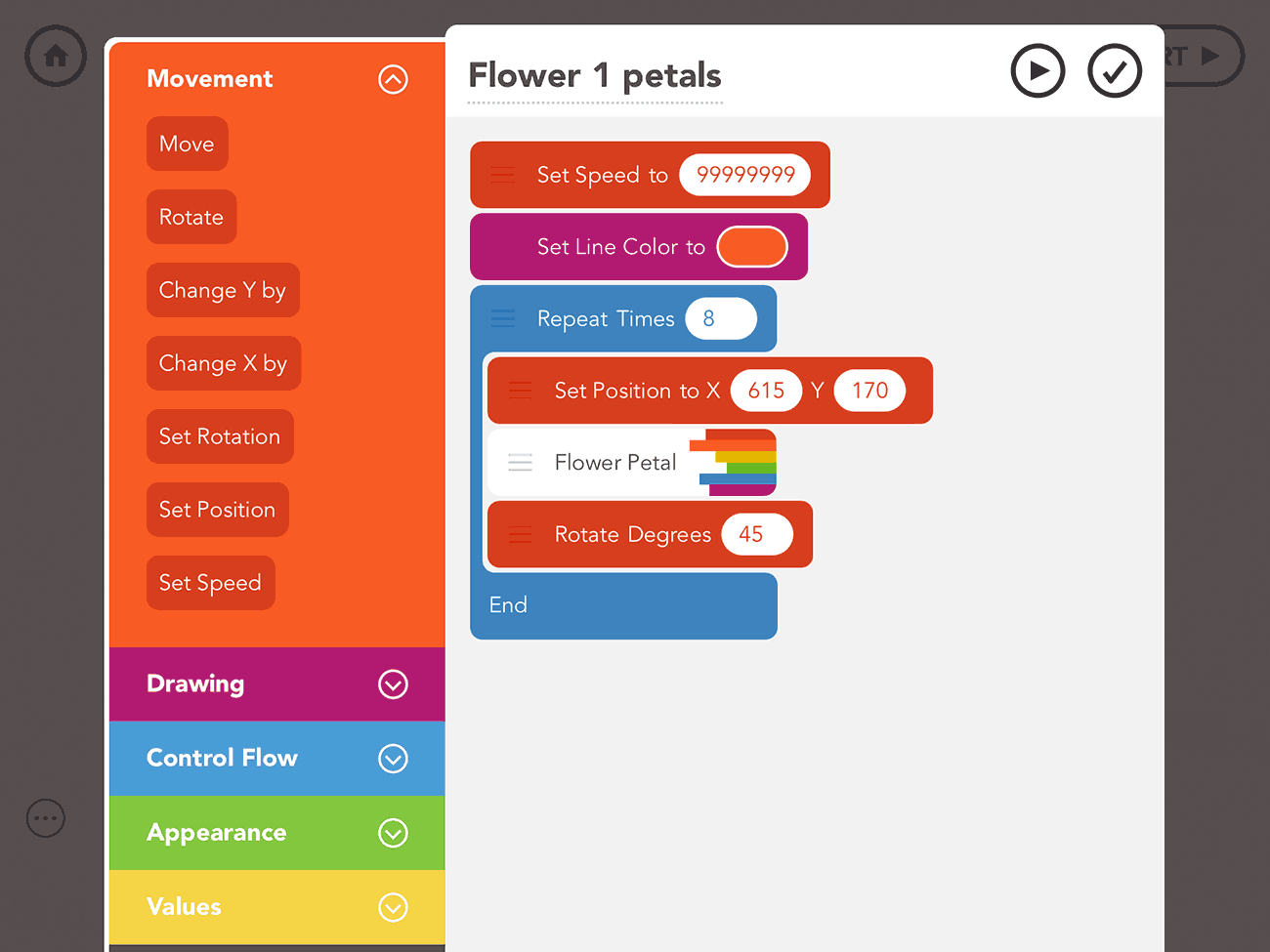 By creating your own “abilities” (simple programs) and using a set of instruction blocks, you can get the Hopscotch characters to do whatever you want.

There are also blocks that let the character draw on the screen, as well as blocks to repeat a set of instructions (known as a “loop” to programmers), and blocks to set and work with numeric values (known as “variables” in the programming world).

By combining these blocks together in different ways, you can make the characters carry out quite intricate tasks as they respond to events. This is the essence of computer programming.

The best way to learn Hopscotch is to dive in and start creating a project. Here’s a simple project you can try with your kid to get up to speed with Hopscotch.

You’re going to get a bear to draw some stairs!

Let’s start by drawing a single step. Follow these steps (pun not intended): 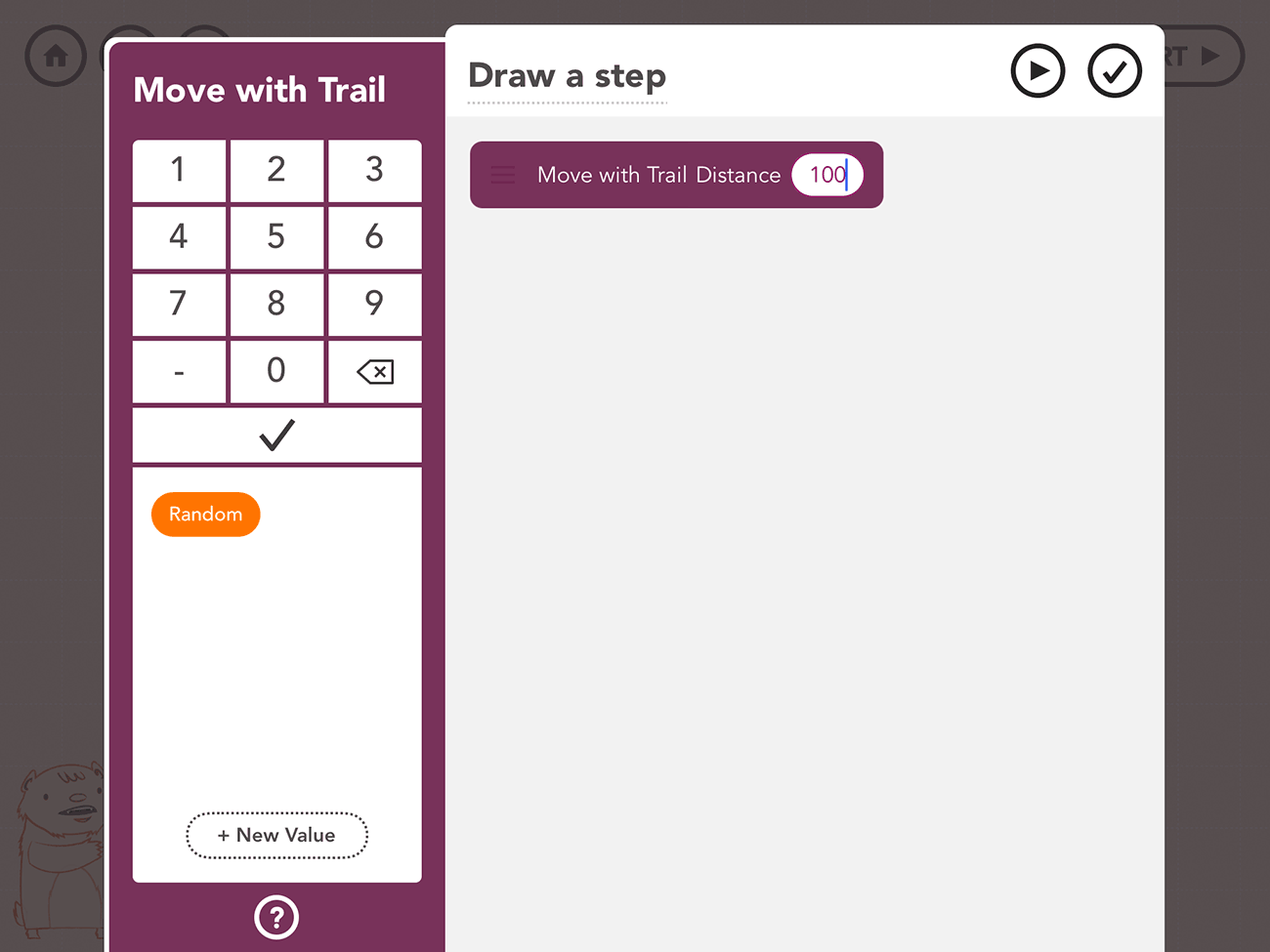 Adding a “Move with Trail” instruction block to the “Draw a step” ability. 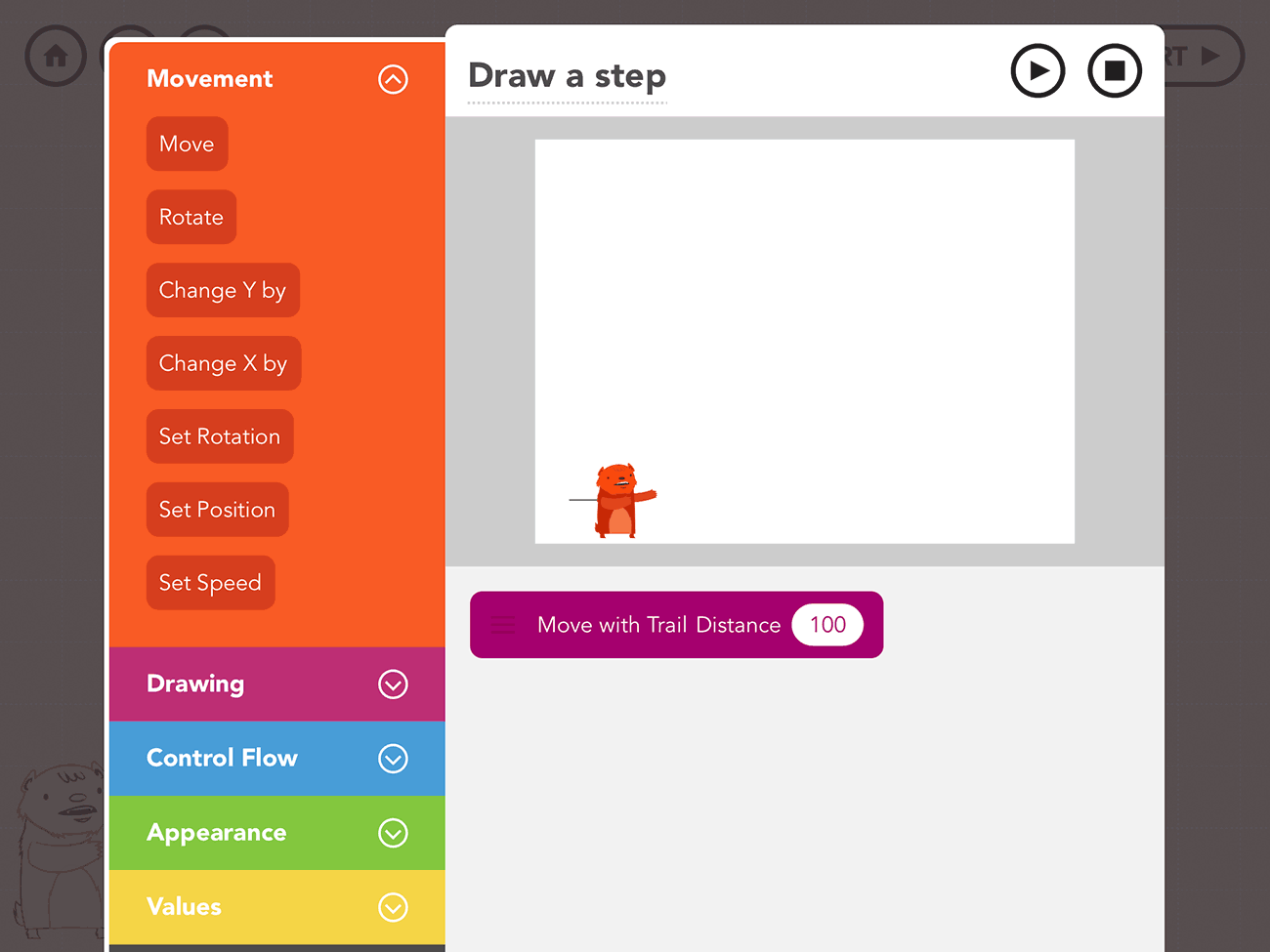 Testing the “Move with Trail” instruction. Our bear has drawn a trail! 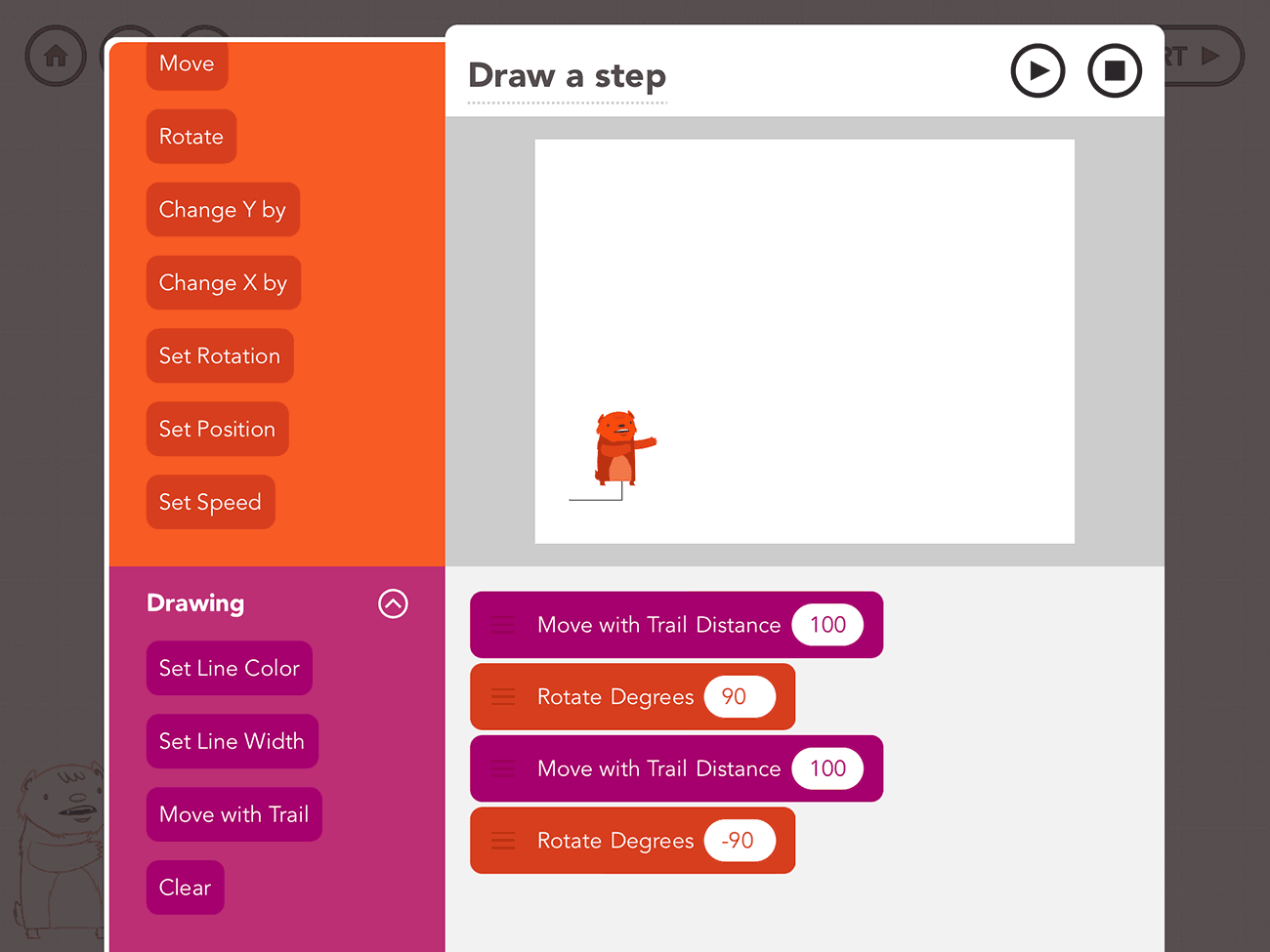 Testing the “Draw a step” ability. Now our bear can draw one complete step!

Great! Tap outside the “Draw a step” ability window to close it.

Drawing a set of stairs

Now that your bear can draw a step, drawing a set of stairs is simply a matter of drawing the same step several times. To do this, we need to create a loop. Follow these steps: 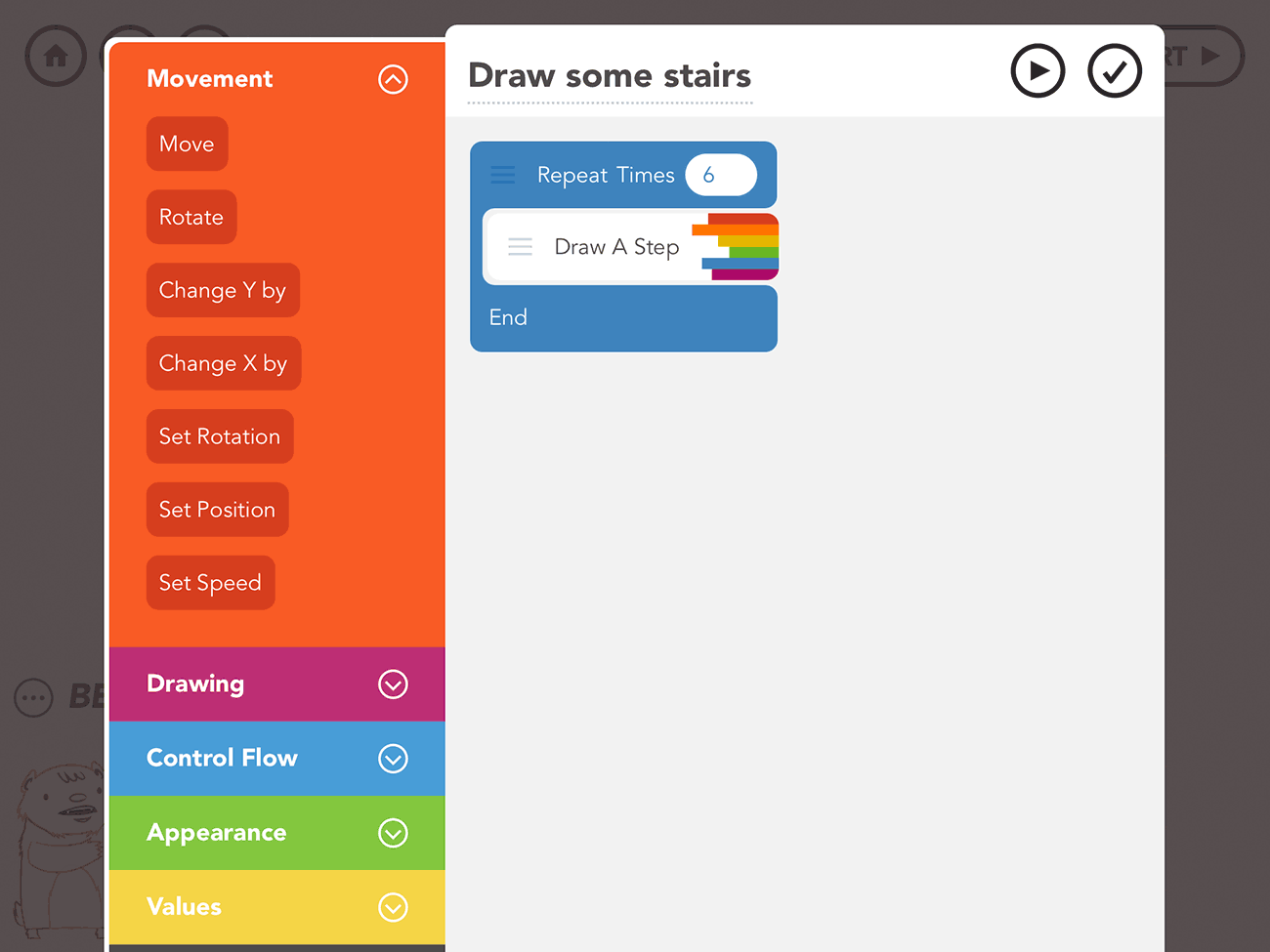 The “Draw some stairs” ability creates a loop that runs the “Draw a Step” ability 6 times.

All good! Your bear can now draw 6 steps to make a set of stairs.

Now tap outside the “Draw some stairs” window to close it.

Tap the Start button in the top right corner of the window to run the project. Your bear should now draw a nice set of stairs! 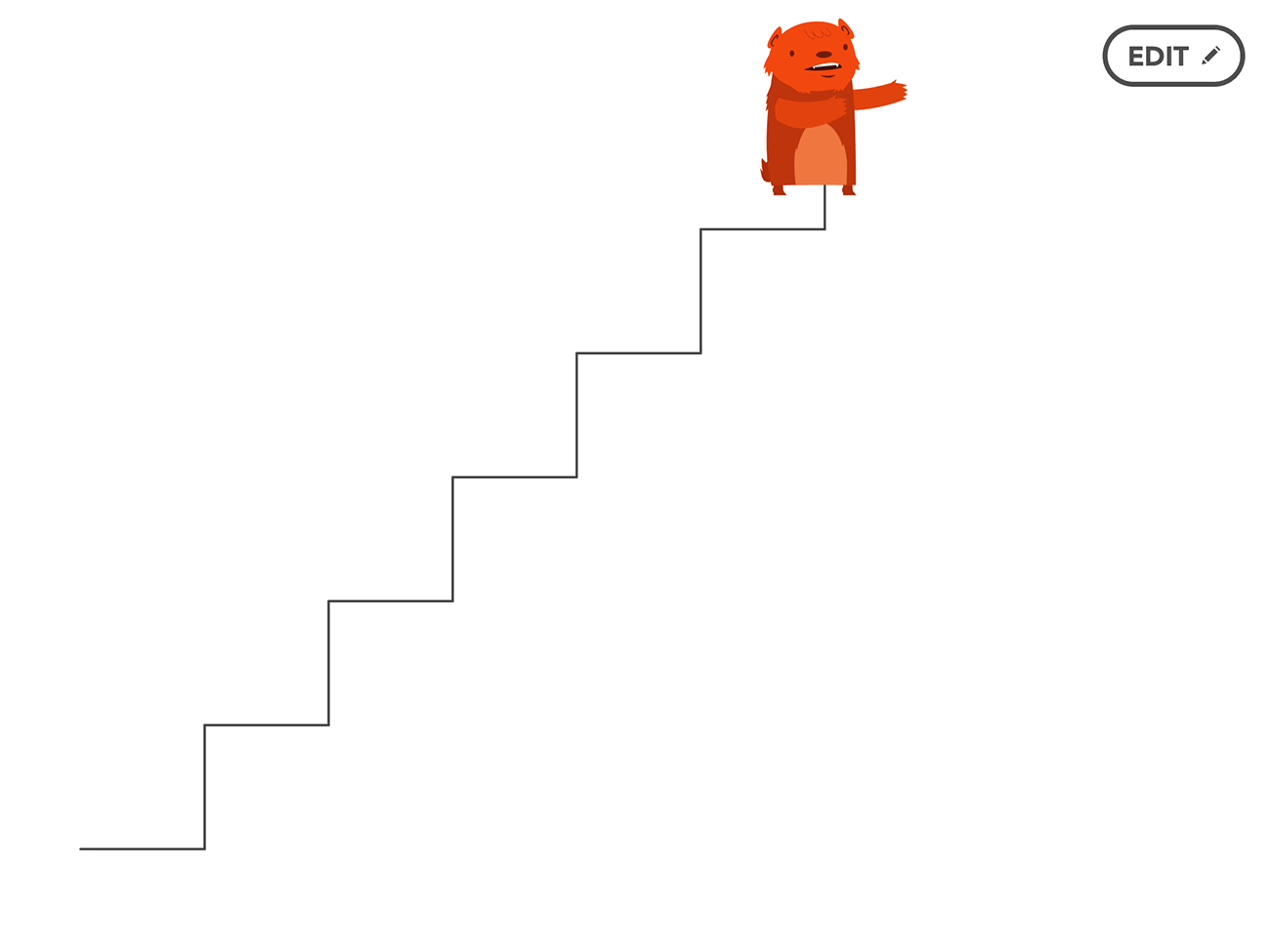 The end result. Our bear can now draw an entire staircase!

Some other fun projects to try

Now that you can create a basic program in Hopscotch, why not try creating some other projects? Here are some ideas:

Write a program that lets you draw lines on the screen by tilting the iPad, a bit like the Etch-a-Sketch toys. You can use the “Text” character to create a letter ‘O’ (for a “pen”), then add rules that draw left, right, up and down as the iPad is tilted: 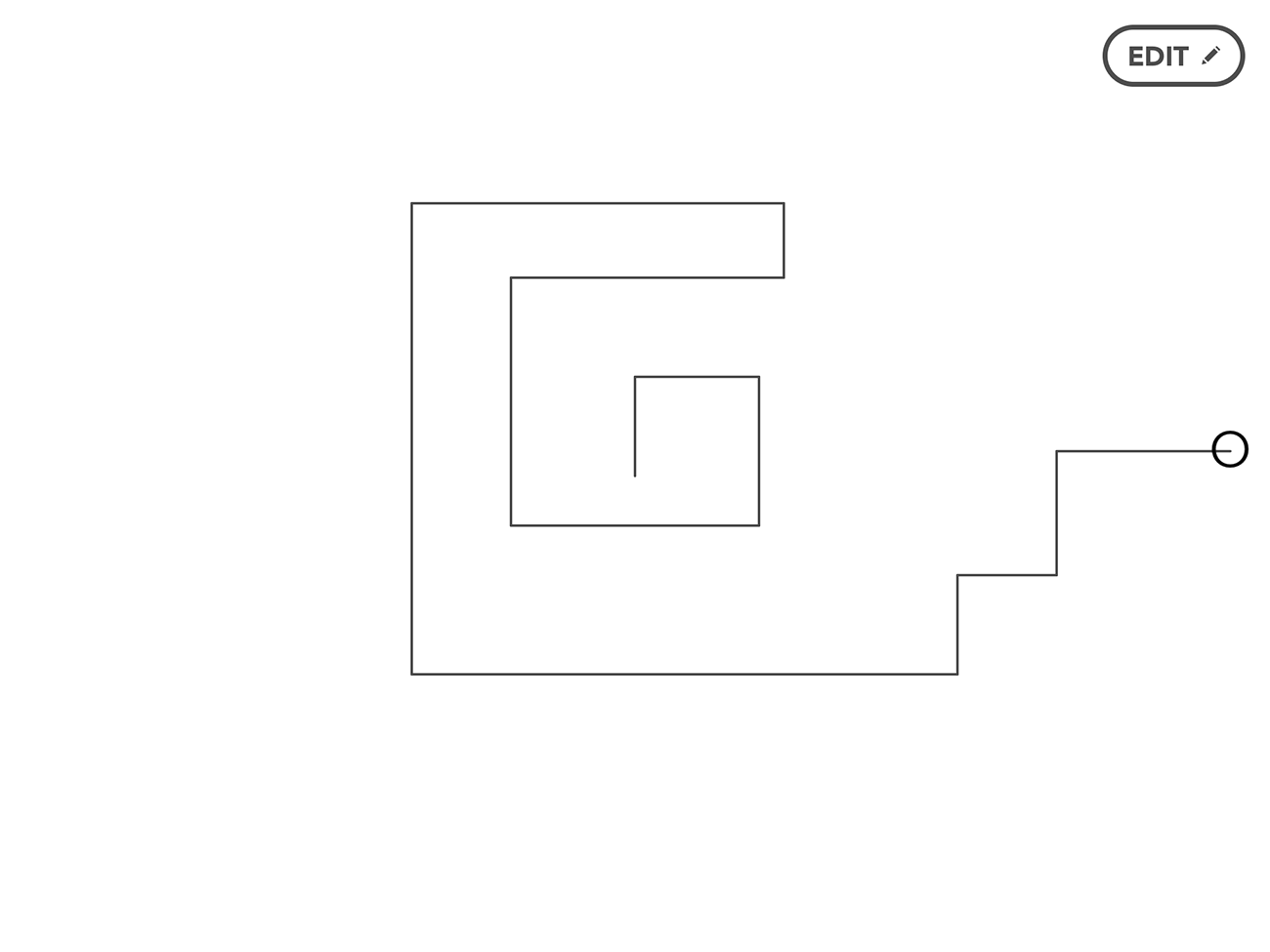 Using the “When iPad is tilted…” events, along with the “Move with Trail” block, to create a simple Etch-a-Sketch.

For an added bonus, you can make the screen clear when you shake the iPad! Check out the “When iPad is shaken” event.

You can use the graphics features of Hopscotch to draw fascinating geometric shapes like a Spirograph. The basic idea is this: 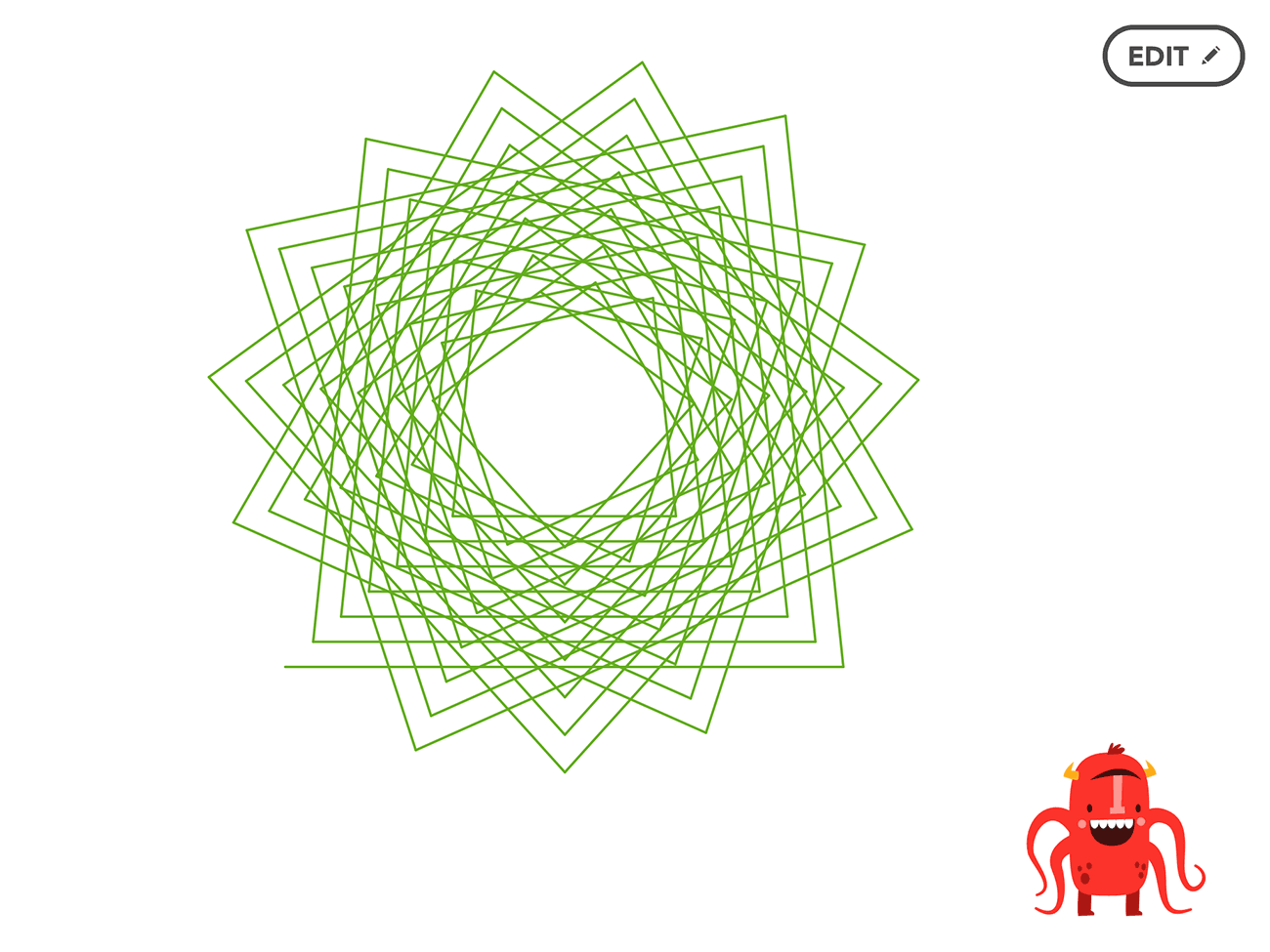 Using some simple maths and the drawing blocks in Hopscotch, you can create some cool geometric patterns.

Hint: You can use values to store the angle to use, as well as the current line length.

Try writing a simple game in Hopscotch! Use a Text character to create a cup to catch the falling monkey. When using the Set Position block, you can drag in the “Random” value from the left-hand window to create a random value that changes each time. That way, you can make the monkey fall from different places. 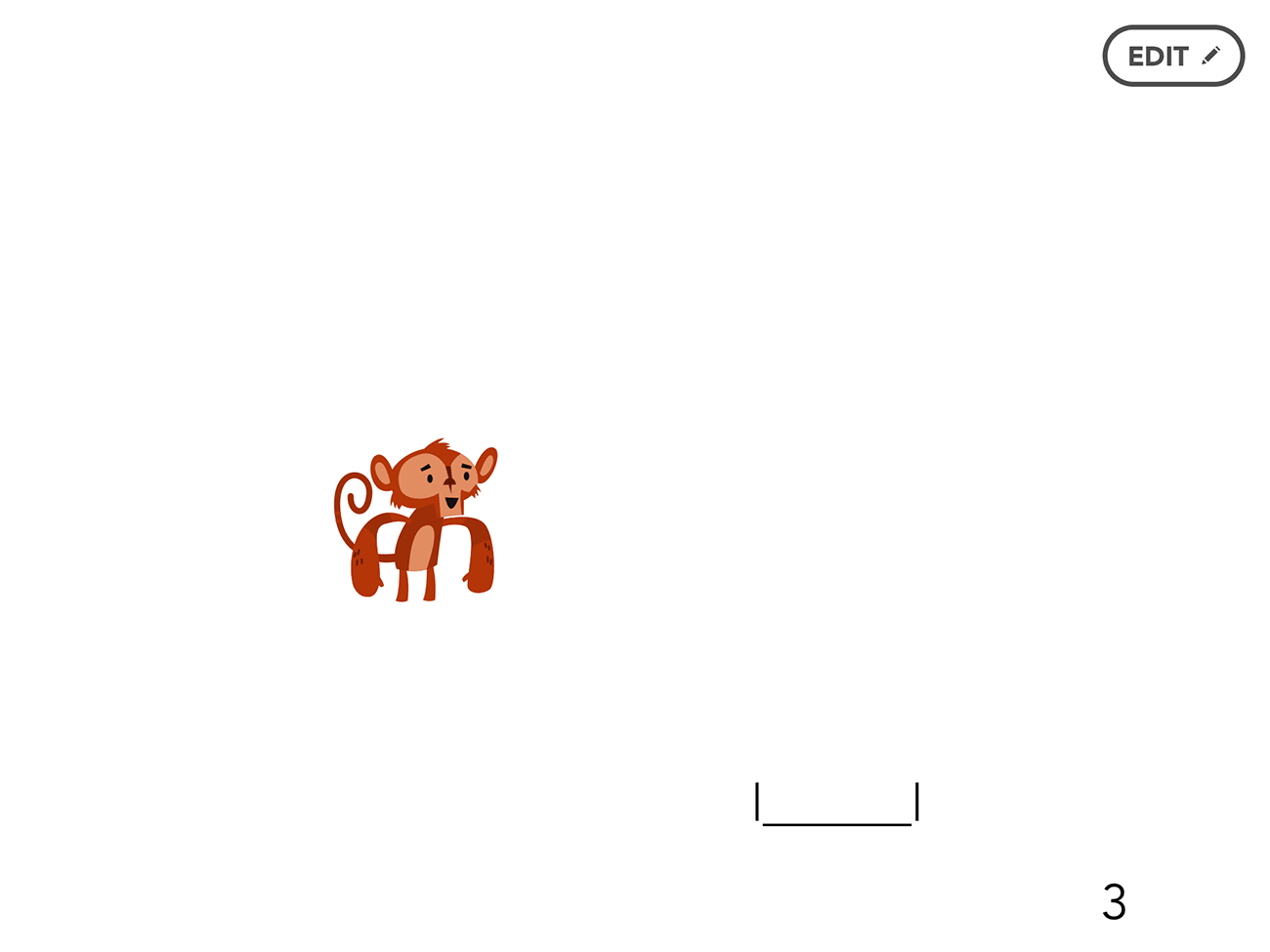 Hopscotch is powerful enough to let you create simple games, like this “Catch the Monkey” game.

Sharing projects with others

A really nice feature of Hopscotch is that you can upload your creations to the cloud, and also play with and download other people’s projects.

To upload your project, just tap the Cloud icon in the project window: 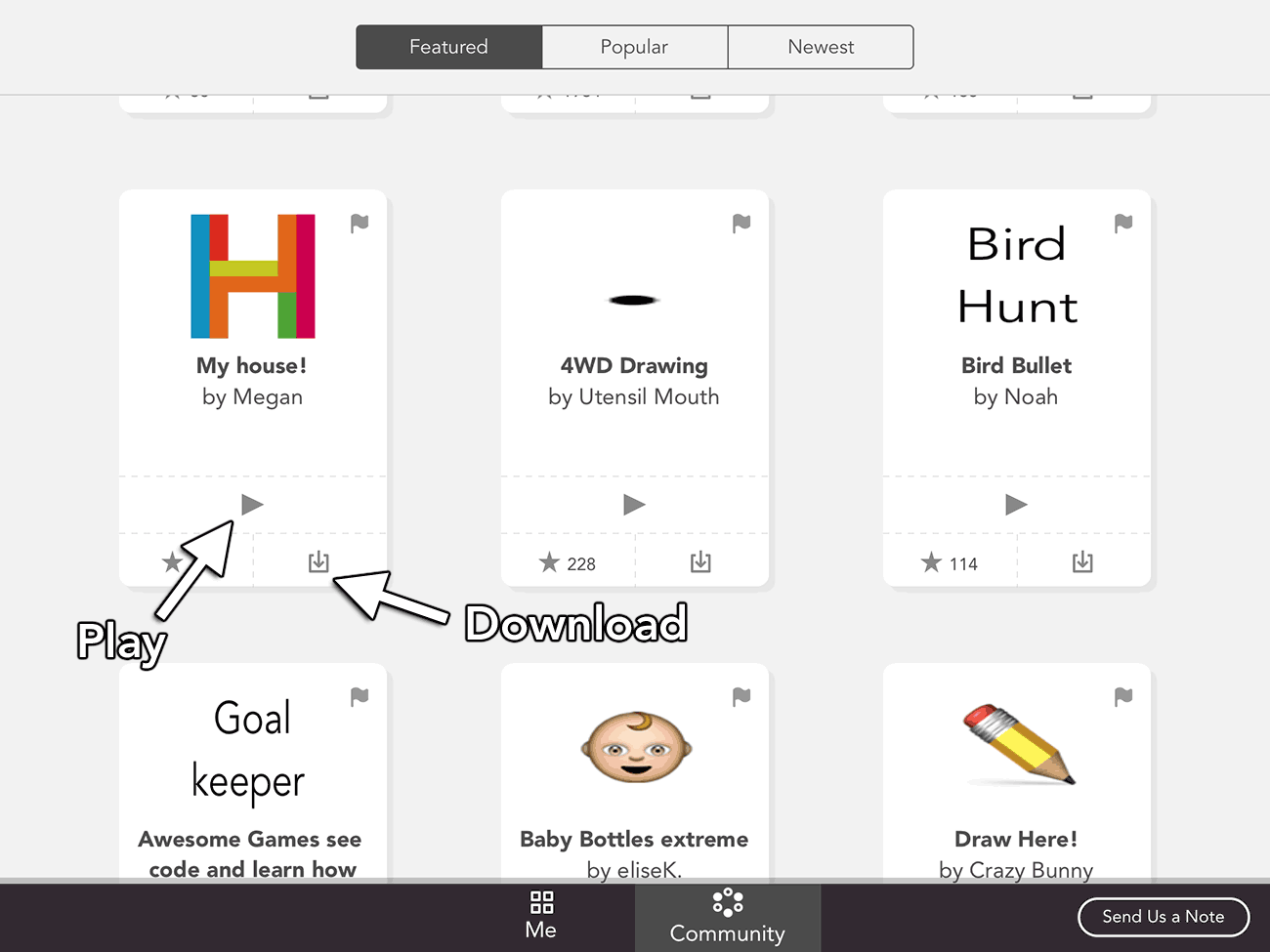 Playing and downloading a community project.

Pulling apart other people’s projects to see how they work is a fantastic way to learn!

Other apps and websites to try

If your kid enjoys Hopscotch and wants to explore programming further, there are some other apps and websites worth looking at: 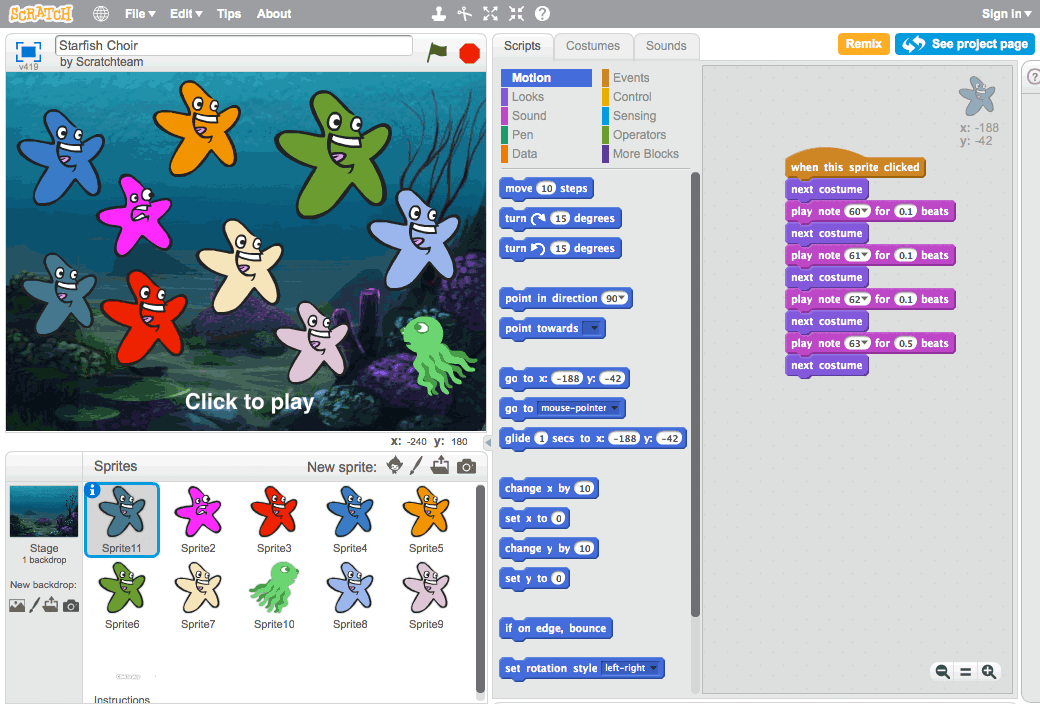 Scratch is similar to Hopscotch, but is quite a bit more powerful. 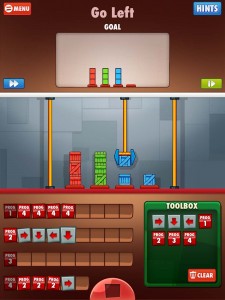 Cargo-Bot is a simple iPad puzzle game that teaches some fundamental programming skills.

If your kid prefers to learn through reading, there are tons of good coding books for kids out there. Here are some great ones:

Books like Hello World! can be a great way to introduce your kid to programming.

I hope you enjoyed this guide to Hopscotch. It really is a fantastic app for getting your kid into coding. With Hopscotch, plus all the other excellent learning resources out there, your kid will be a champion coder in no time!

Even better, the Hopscotch team are constantly improving the app. Soon they’re planning to introduce conditional blocks, which will take the app to a whole new level.

Do you know of any other great ways to help kids learn programming? I’d love to hear about them in the comments below. Thanks for reading!

[Image credits: Beautiful Rainbow by Alison, cropped // My House! & Flower 1 petals by Megan (find both these projects in the Hopscotch Community!)]

3 comments on “Your Kid’s Coding Skills Will Leap Ahead with Hopscotch!”