With the New ScratchJr App, Any Child Can Learn Coding on the iPad Today 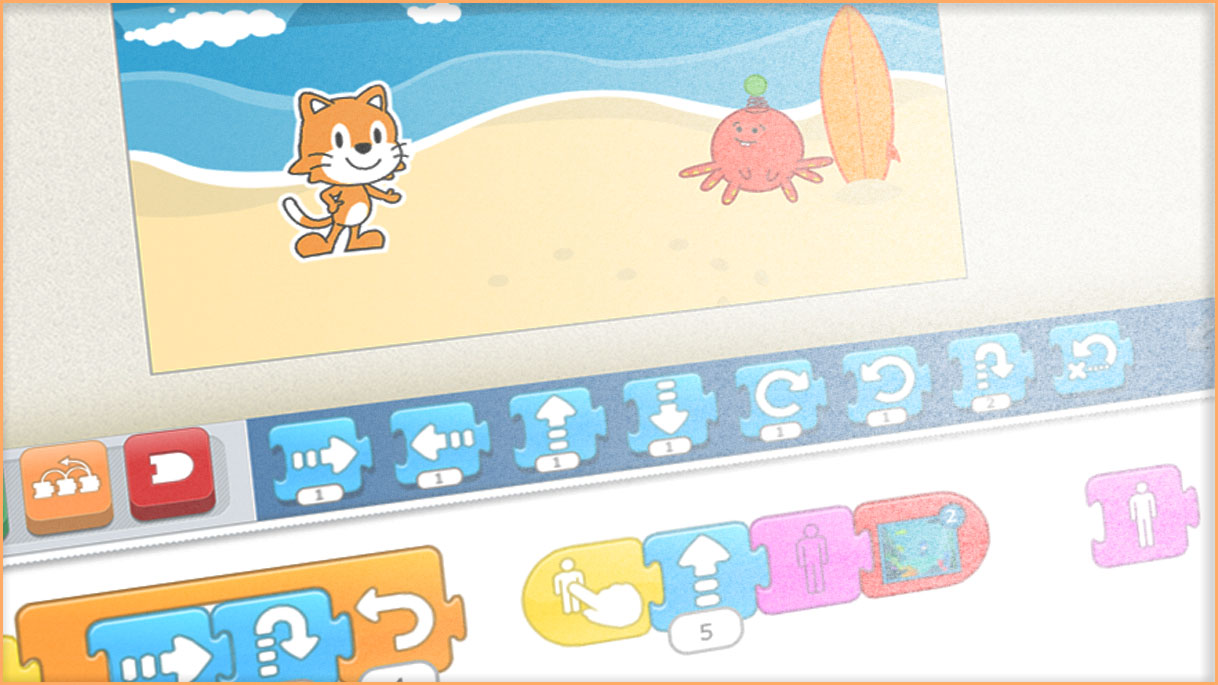 As computers and digital devices become commonplace, computer programming is becoming an increasingly useful skill for kids to learn. Many schools are now teaching coding skills as part of their curriculum, even with students as young as five or six. Some educators such as MIT’s Mitchel Resnick go as far as to say that coding is the new literacy — as important to a child’s education as reading and writing skills.

The great news is that, thanks to modern technologies such as the iPad, young kids can pick up coding skills even before they can read and write. This is exactly what ScratchJr is designed for. In this article you’ll get a quick review of ScratchJr, find out what your kid can do with it, and discover which coding skills your kid will learn while using ScratchJr. You’ll also look at some other great apps and websites that your kid can use to learn coding. 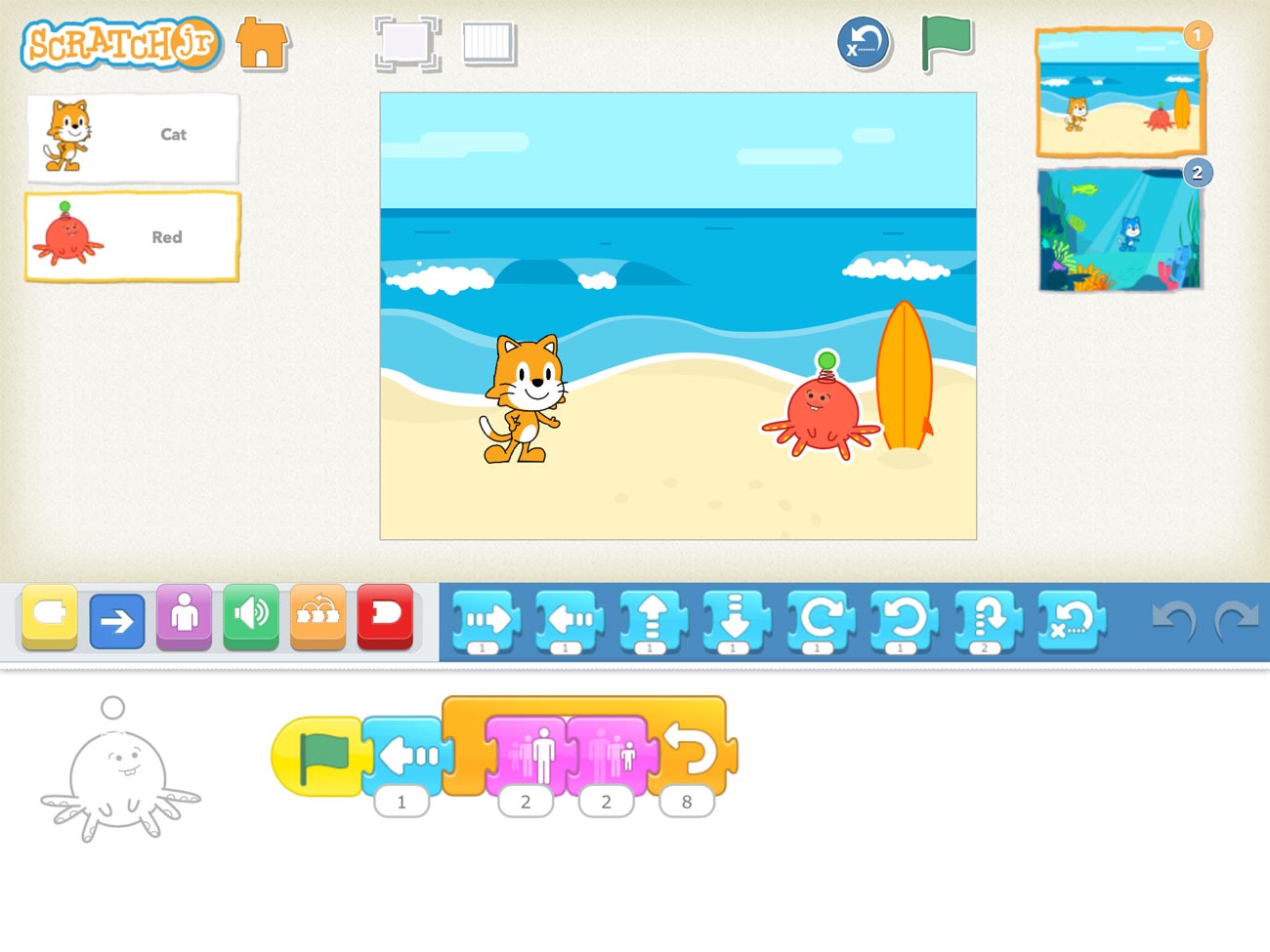 With ScratchJr, you create computer programs by dragging coloured blocks. In this screenshot, the red octopus character’s program is shown at the bottom of the screen.

ScratchJr is based on the popular Scratch website, which is also designed to teach kids (and indeed grown-ups) computer programming skills in a fun, easily accessible way. Scratch and ScratchJr are similar in many ways, but there are some key differences:

ScratchJr is easier to pick up and use than Scratch, partly because it is simpler, and partly due to its kid-friendly touchscreen interface. The graphics that come with the app are really nice, the user interface is intuitive, and the whole app has a fun, welcoming feel that makes it a pleasure to use.

Scratch is a more powerful version of ScratchJr — good for older kids, but it only runs on desktop computers.

What can kids do with ScratchJr?

Kids can use ScratchJr to create all sorts of fun animated stories and games. The basic idea is that you create a project, pick a background stage, add one or more characters to the stage, then snap together various jigsaw-piece programming blocks to create a short computer program for each character, known as a programming script in ScratchJr.

Each character can have several different scripts, triggered by different actions such as tapping the character; tapping the project’s green “start” flag; or bumping into another character. In this way, you can build up quite a complex scene of interacting animated characters. 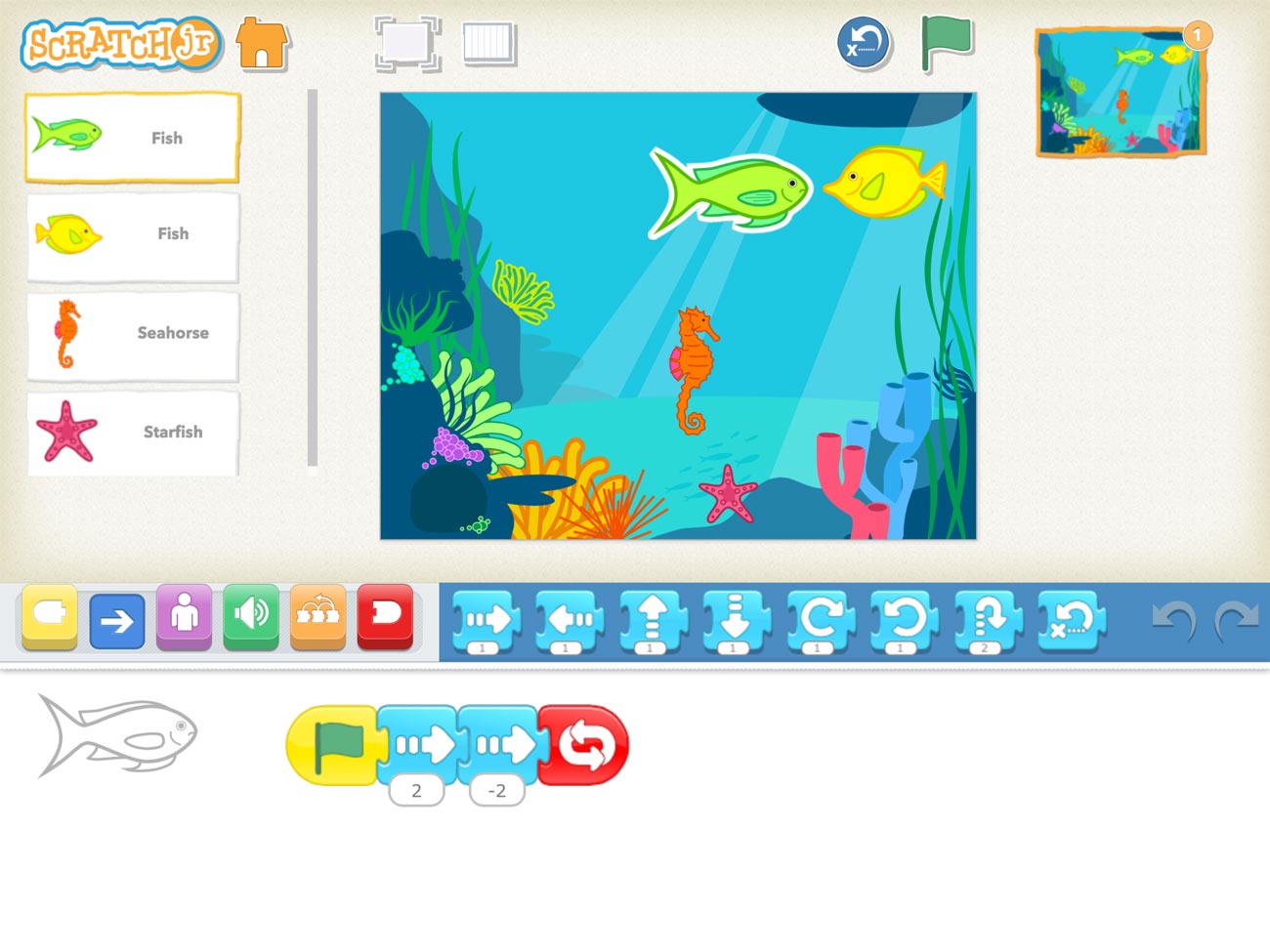 In this scene, the green fish’s script says: “When the green flag is tapped, move forward and backward two grid squares, then keep repeating this script over and over.”

Available backgrounds include parks, cities, sports fields, beach scenes, forests and space scenes. You can also draw your own background using the built-in drawing tools, as well as take a picture with the iPad’s camera and use it as part of a background.

There’s a large library of characters to choose from too, including animals, people, vehicles, plants and inanimate objects. As with backgrounds, you can also draw new characters, as well as incorporate photos taken with the iPad’s camera. 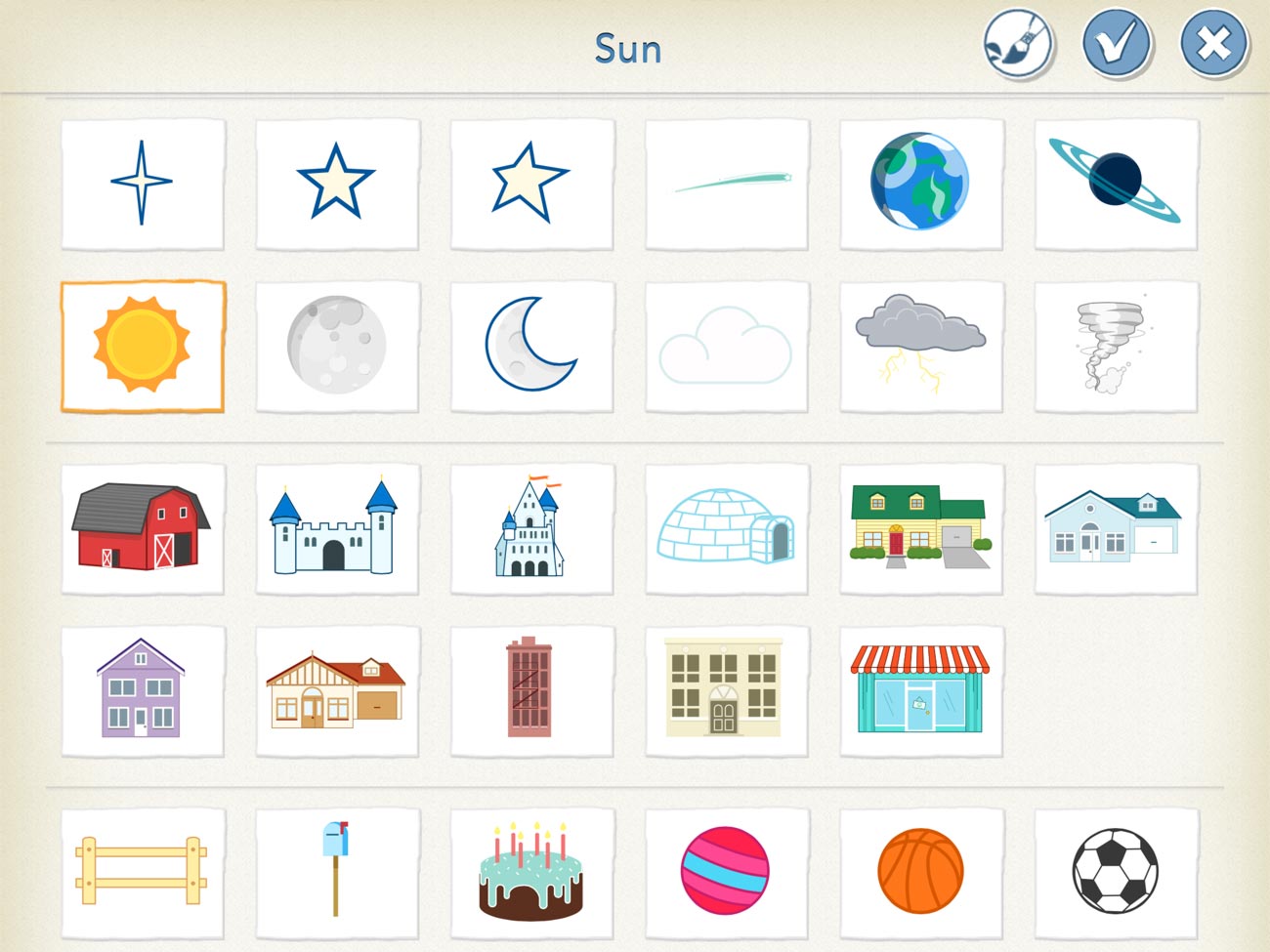 ScratchJr comes with a decent library of characters and backgrounds — and you can easily create your own, too.

You can also create several different pages within a project, each with its own background and characters. This allows you to create a story that comprises various different scenes. ScratchJr also lets you add text anywhere on each page, which is great for adding titles or a storyline.

As to the programming blocks themselves, there are nearly 30 different blocks available for your kid to play with, broken down into six categories, as follows: 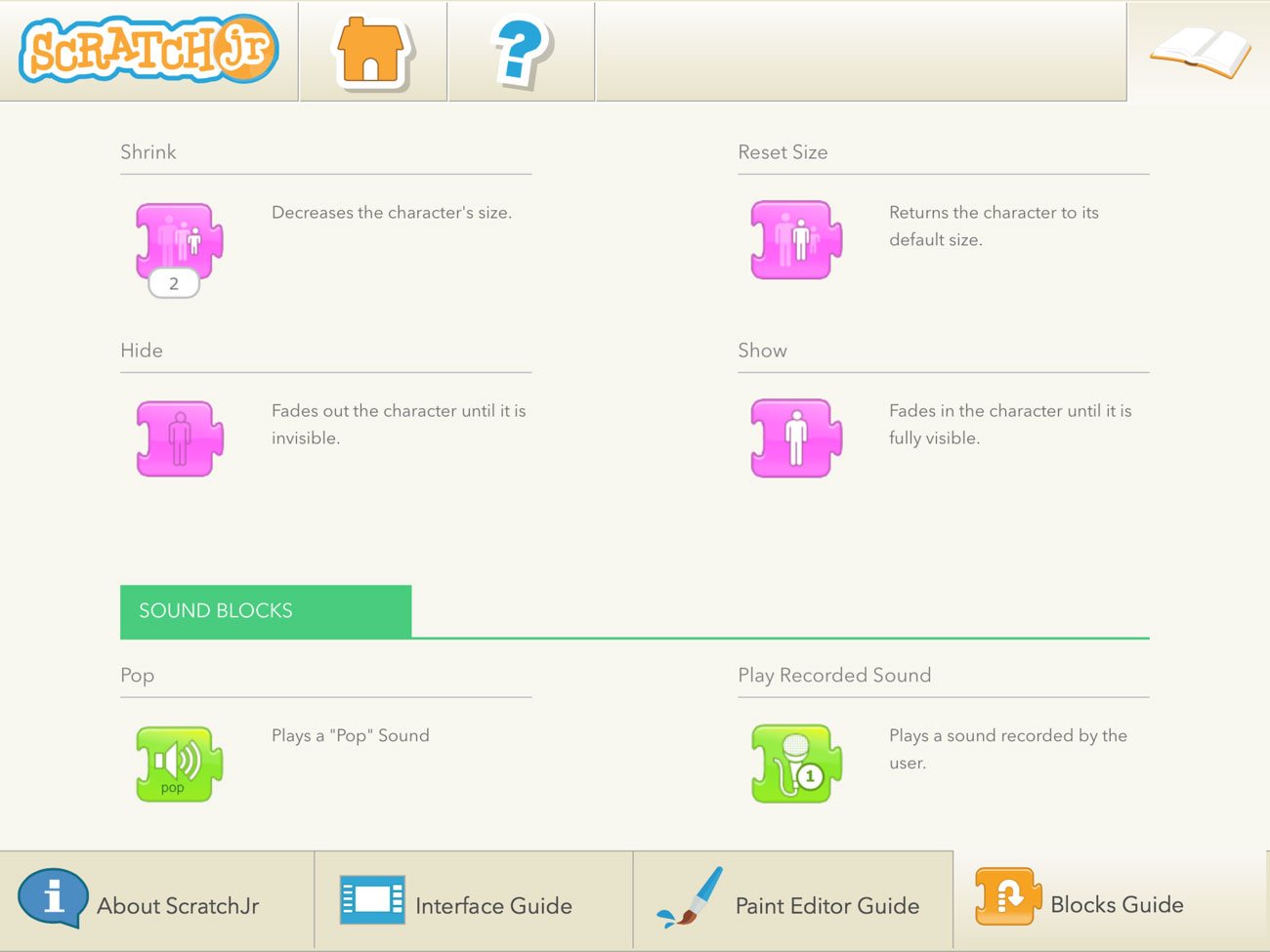 Some of the many programming blocks available in ScratchJr.

If your kid gets stuck at any point, ScratchJr has an excellent help system. On ScratchJr’s home screen, you can tap the question mark icon to access a short intro video which neatly covers the app’s main features, as well as choose from eight sample projects that show how ScratchJr works.

In addition, you can tap the top-right book icon on the home screen to access a brief introduction to ScratchJr, handy guides to the main interface and paint editor interface, and a very useful Blocks Guide that describes each of the programming blocks available in ScratchJr.

You can find a lot of this information on the ScratchJr website, which also includes a set of downloadable activity PDFs for your kid to try. 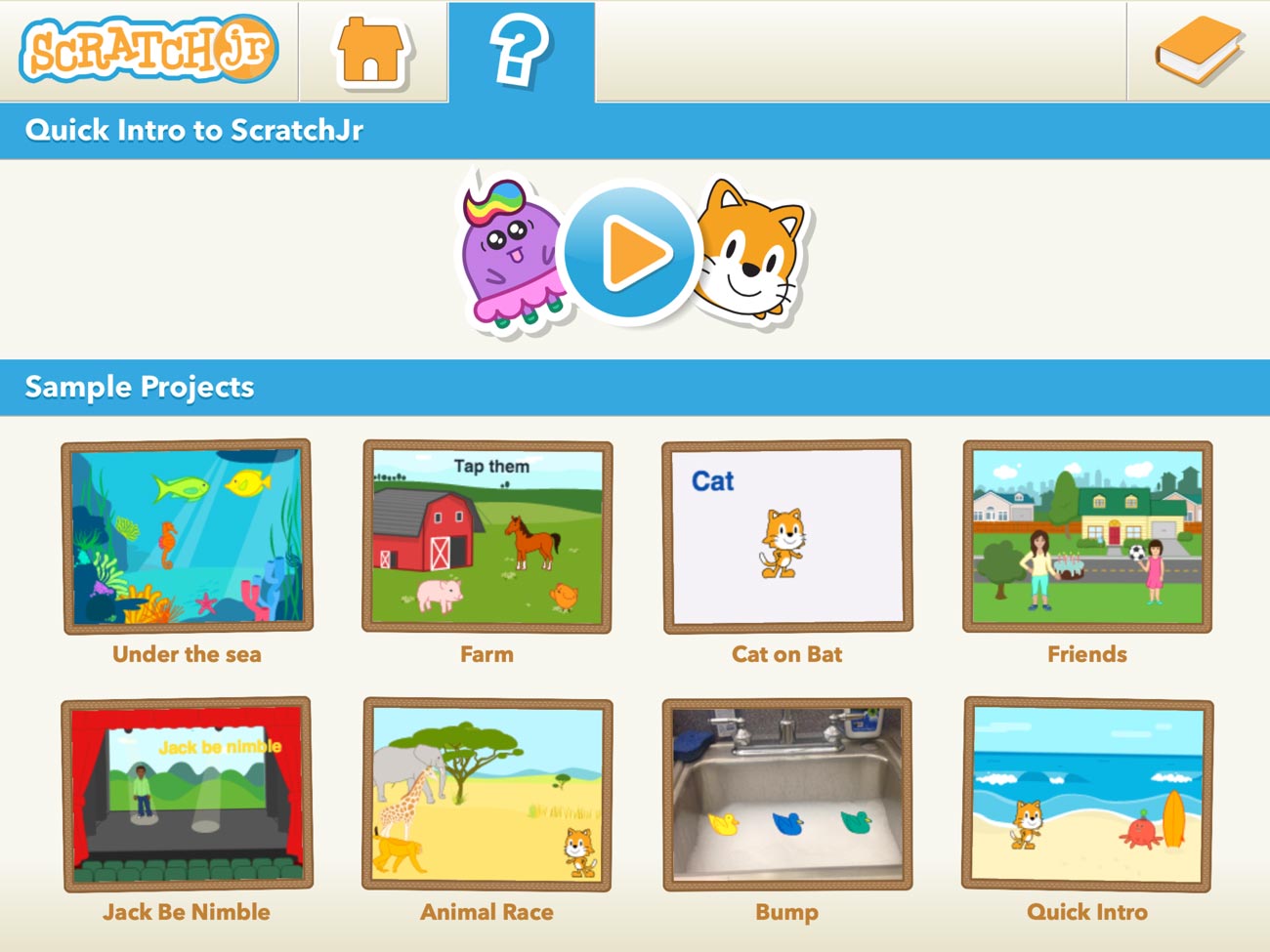 ScratchJr has a good help system, including an introductory video and sample projects to play with.

What will my kid learn with ScratchJr?

We’ve said that ScratchJr can teach coding skills, but what exactly can your kid learn while using the app? Some of the key programming concepts that ScratchJr teaches include:

In short, while ScratchJr is very simple and easy to use, it provides a good grounding in some of the essential concepts that all computer programmers use all day, every day. 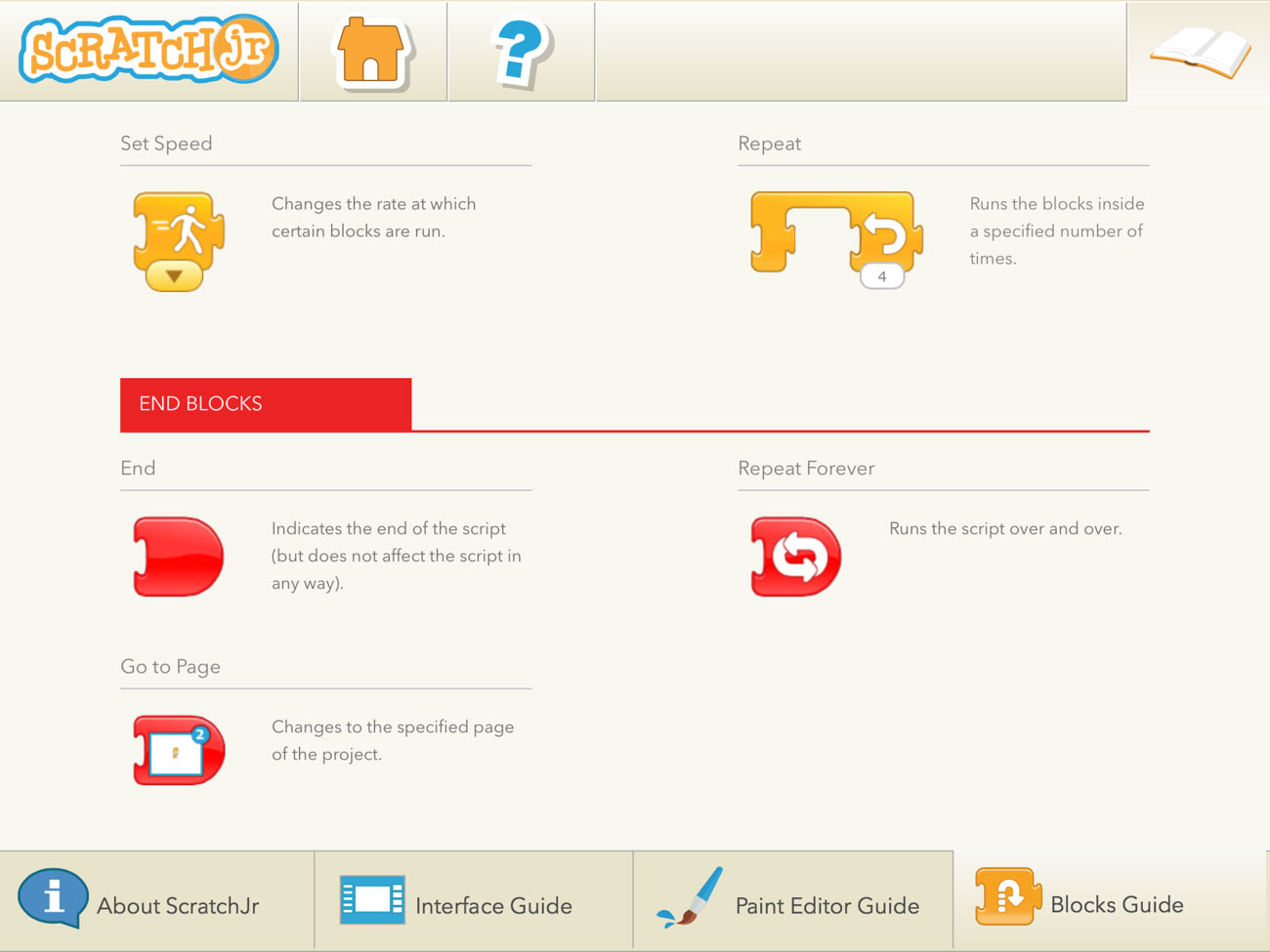 ScratchJr’s Repeat and Repeat Forever blocks help your kid learn about the programming concept of loops.

What else is out there for the iPad?

As well as ScratchJr, there are many other excellent iPad apps available to help your kid learn to code. These include: 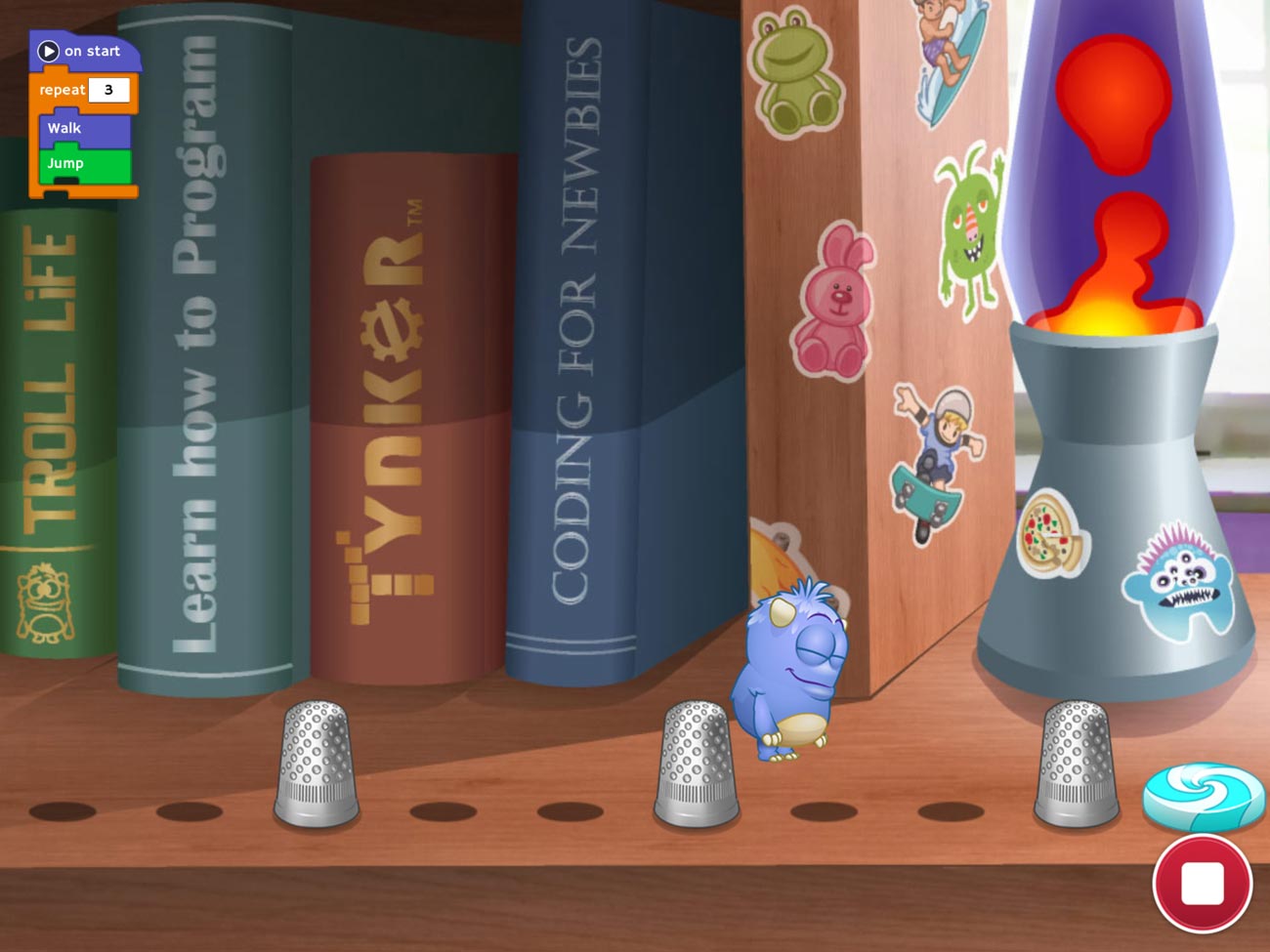 I hope this article has given you a flavour of ScratchJr, and how your kid can use this great new app to learn coding skills. Coding is a really important skill to have these days, so if you haven’t already done so, I recommend downloading ScratchJr — and some of the other fantastic iPad apps mentioned above — and taking them for a spin with your kid!

Have fun, and thanks for reading. 🙂

One comment on “With the New ScratchJr App, Any Child Can Learn Coding on the iPad Today”