Kerbal Space Program Teaches Kids about Spaceflight, Science and So Much More 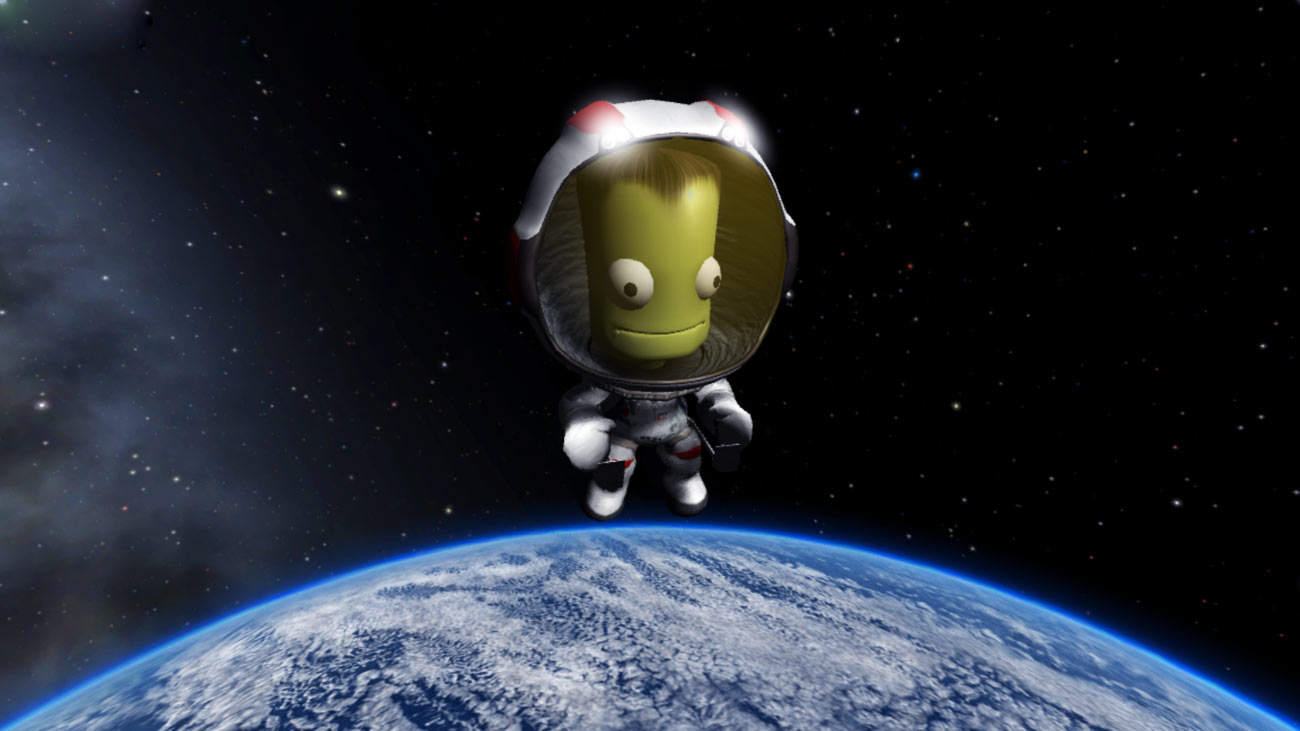 Does your kid get excited about space exploration? My kids certainly do! There are, of course, lots of fascinating documentaries and movies about space. However, if your kid really wants to find out what it’s like to fly a rocket into space, look no further than the fantastic computer game, Kerbal Space Program.

This article is an introduction to Kerbal Space Program. You’ll find out what you can do in the game, how to get started with it, and some of the things that kids can learn through playing the game.

You’ll also explore some of the excellent mods that you can get to enhance the game further, and learn about what to expect from the game in the future.

What Is Kerbal Space Program?

Kerbal Space Program is an indie space simulator game that lets you build rockets and launch them into space. It’s a fairly realistic simulation of space and spaceflight, with a pretty steep learning curve. However, once you learn how to build and fly spacecraft, it’s very rewarding to play.

The game is set in the imaginary Kerbol system, similar to our Solar System. The home planet, Kerbin, is similar to Earth, with continents, oceans and a breathable atmosphere. Other planets include Moho (which is similar to Mercury), Eve (Venus), Duna (Mars) and Jool (Jupiter). There are also several moons orbiting Kerbin and other planets.

To get into space, you first head to the Vehicle Assembly Building to construct your rocket. Once it’s ready, you move it to the launch pad and lift off! If all goes well — and you know what you’re doing — your rocket will make it into orbit. 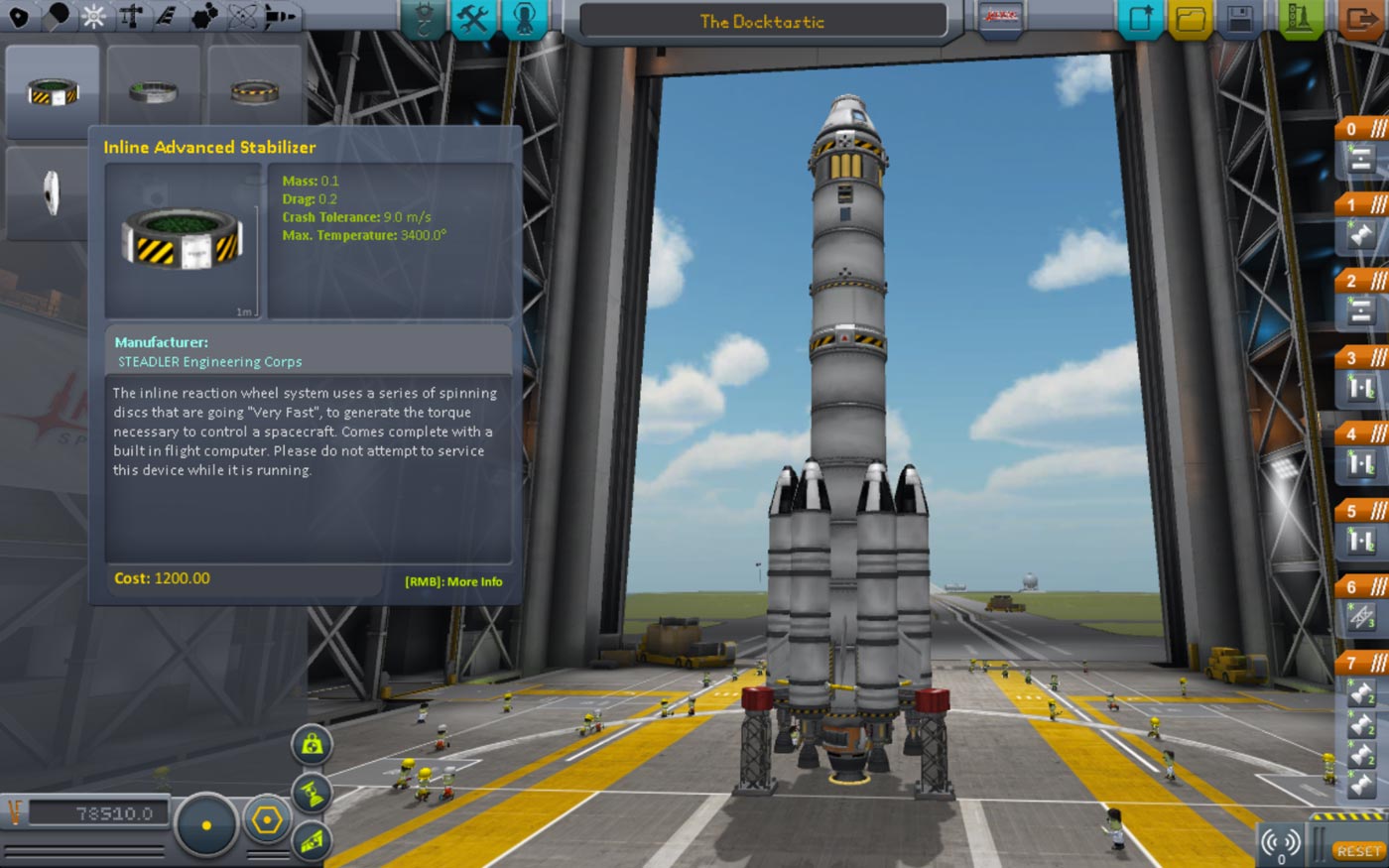 Constructing a rocket in the Vehicle Assembly Building.

As well as rockets, you can also build spaceplanes, rovers and even boats from the wide range of vehicle parts available.

The complexity of the game — as well as the maths involved with orbiting, landing and rendezvous — probably make Kerbal Space Program too challenging for kids under ten to play well. That said, my seven-year-old still enjoys building and flying rockets around Kerbin (and crashing them too!).

There are three ways to play the game: 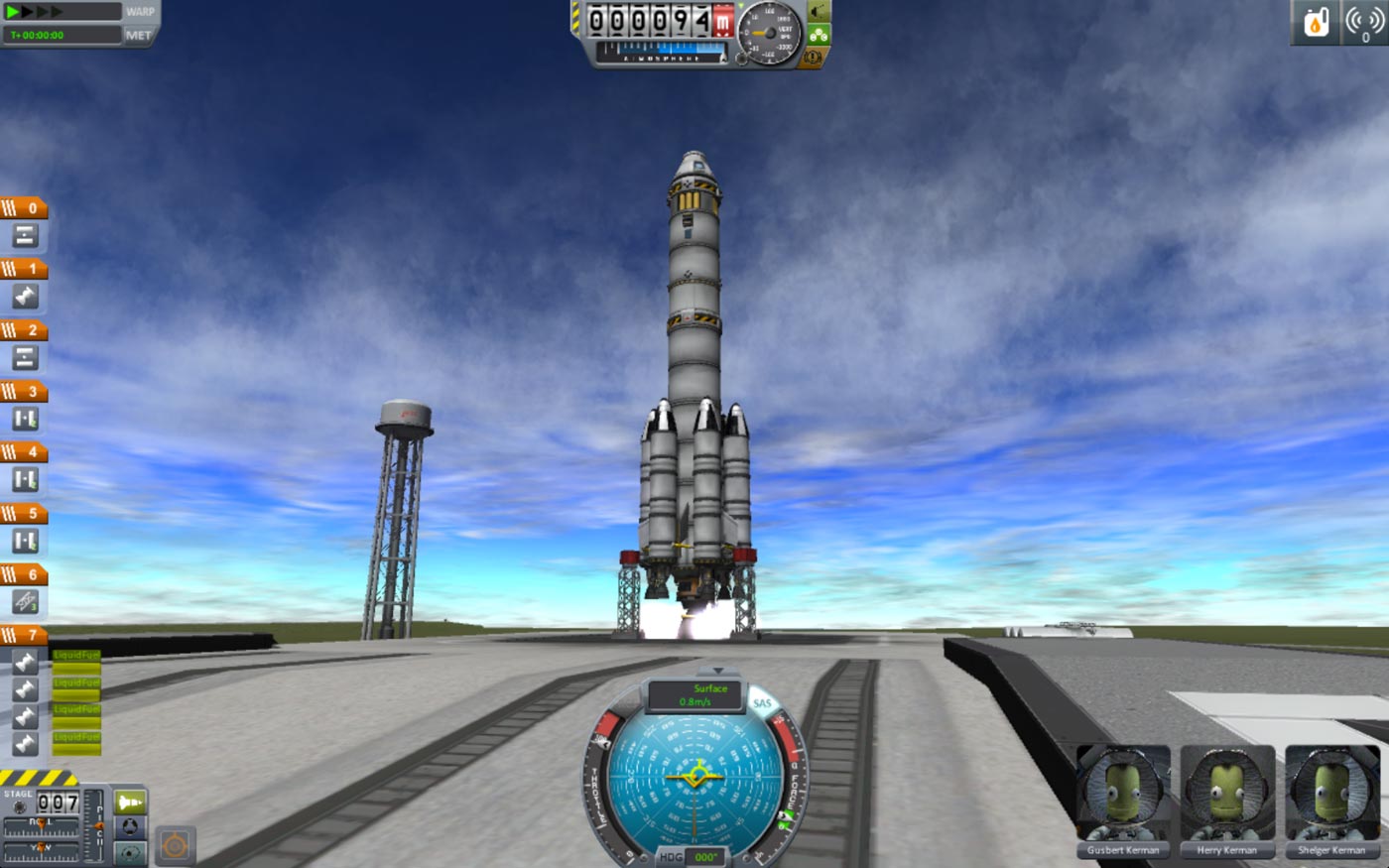 History of the game

The game’s original creator, Felipe Falanghe, used to make toy rockets by strapping fins on fireworks and seeing how high they could get. He also made Kerbals — little men out of tinfoil — and sent them up with the rockets.

Later, Falanghe’s employer, Squad, liked the idea so much that they agreed to help turn it into a video game. And so Kerbal Space Program was born.

Kerbal Space Program is evolving in a similar way to Minecraft. Although it’s a paid product, it is still essentially at the beta stage, with many small updates being released all the time. Despite being at an early stage, the game is already packed with enough features to provide tons of fun and learning potential, and it’s relatively bug-free.

Another plus point is that new and exciting features are being added all the time, which keeps the game fresh and interesting from one month to the next.

Getting started with Kerbal Space Program

Kerbal Space Program is available for Windows, Mac and Linux. You can buy the game in two ways: via the game’s website, or via Steam. There’s also a free demo version available, which is a great way to try out the game and practise the basics of spaceflight.

Once you start the game, head over to Training to work through a series of tutorials on rocket construction, launching, orbiting and so on. There’s even a tutorial on getting to the Moon (or the Mun, as it’s called in the game). 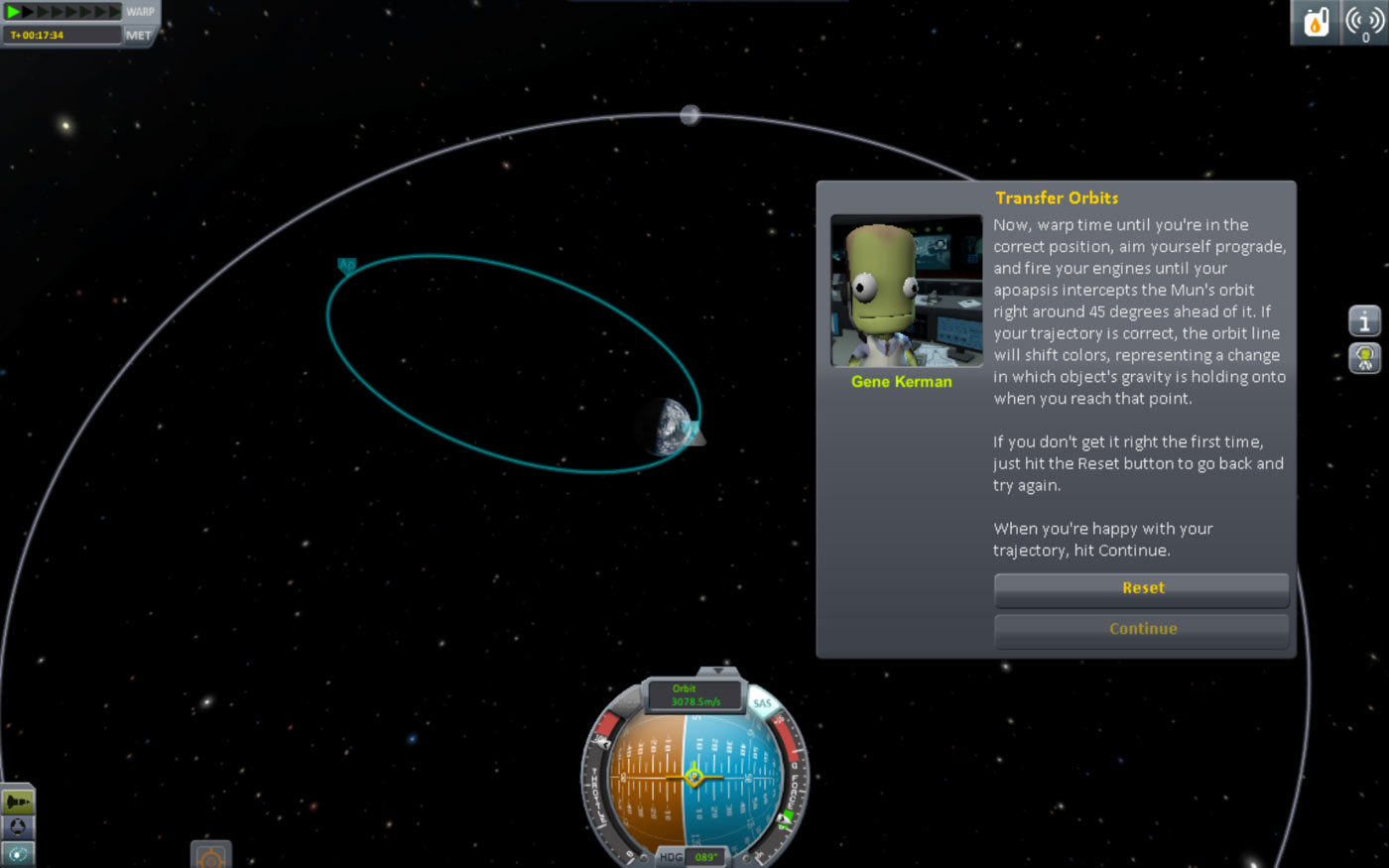 The tutorial on getting to the Mun teaches you all about transfer orbits.

It’s also worth trying out the built-in Scenarios, which give you an easy way to practise various manoeuvres without having to go through the process of building and launching rockets.

When you’re ready to head out on your own, start a new Sandbox game and start building your rocket! You can also load in one of the predefined rockets to get you going quicker.

If you need further help, there’s a fantastic community on the web that has created tons of great tutorials and other resources. Check out the following:

As with most video games, kids playing Kerbal Space Program can develop skills such as planning, problem solving and perseverance. However, Kerbal Space Program is not a casual game by any means. If they are to do well at the game, players need to devote a lot of time to learning the mechanics of space travel and carefully planning missions.

Here are some specific concepts and skills that children will learn playing Kerbal Space Program:

A big part of playing Kerbal Space Program is learning how to construct and fly rockets, spaceplanes and other space vehicles. This means you need to understand concepts such as lift, drag, control surfaces and rocket staging. As you build and fly more rockets, you’ll get a real sense of how the planet’s atmosphere and gravity make life difficult for rocket engineers! 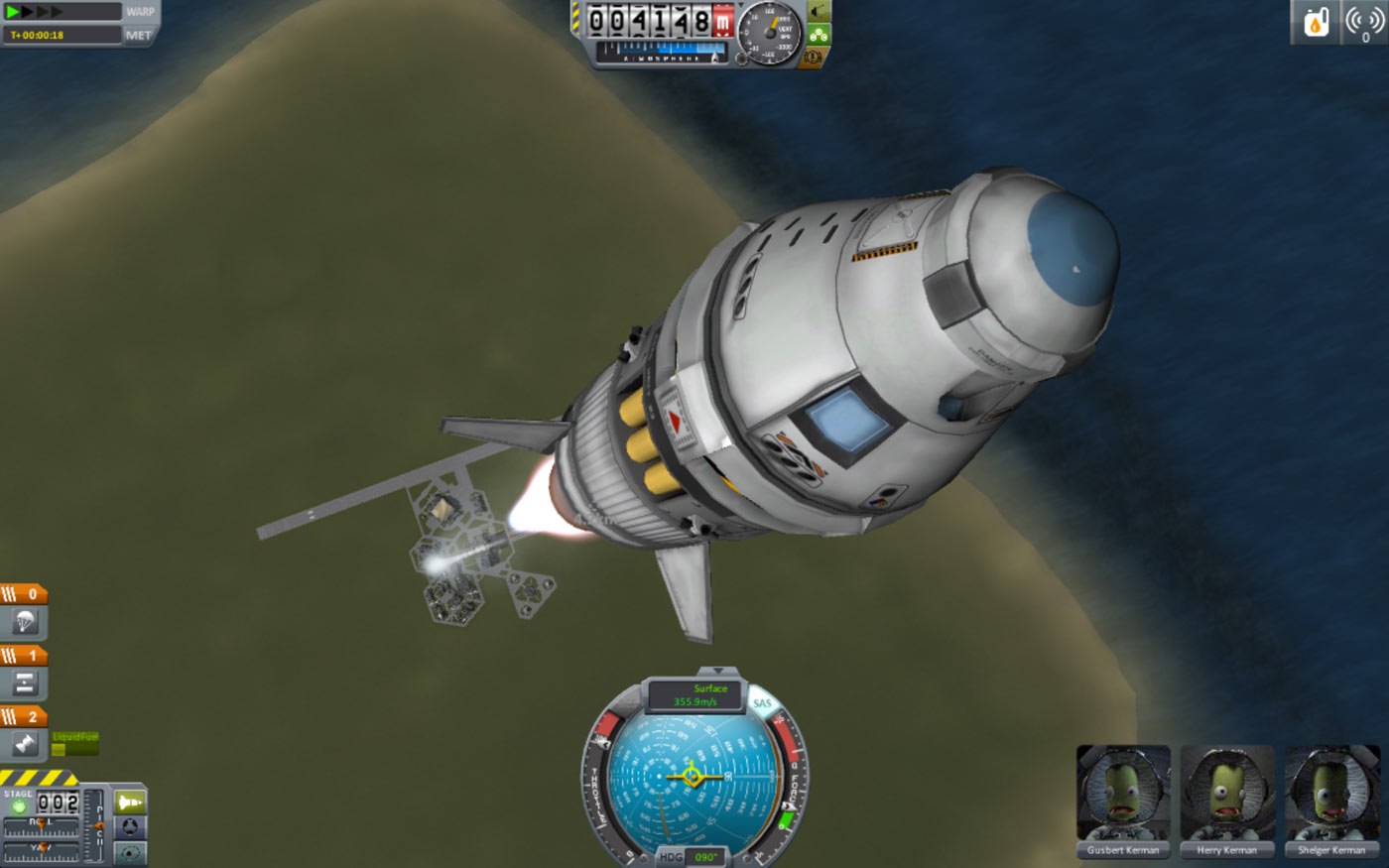 Flying a rocket in Kerbal Space Program is easier than in real life, but it’s no walk in the park!

Just getting your first rocket into space can be a challenge: it needs to have enough engines and fuel to provide lift, but if it’s too heavy then it will never make it into orbit. Even once you’re in orbit, you need to make sure you have enough fuel to carry out your mission and return home. This means that every mission is a balancing act between fuel and mass. You learn how to use staging to achieve this balance, by breaking your rocket up into separate stages that you can jettison once their fuel is used up, thereby reducing weight.

You also need to make sure your rocket is symmetrical and stable in flight. To do this you need to get to grips with centres of mass and points of action, as well as use wings to keep the spacecraft pointing in the right direction.

Orbiting is one of the most fundamental aspects of both astronomy and spaceflight. However, getting into orbit isn’t as simple as pointing your rocket at the sky and pressing the “lift off” key.

It takes a while to learn all the intricacies of orbits. You’ll learn how to burn your rocket prograde (in the direction of travel) and retrograde (against the direction of travel) to change the size of your orbit. You’ll also learn how to rendezvous with other orbiting spacecraft by matching their orbits, as well as make transfer orbits so that you can get to other planets and moons.

The physics of moving and working in space

Compared to your average space video game, Kerbal Space Program is a lot more realistic (read: hard!) when it comes to moving in space. You have a navball at the bottom of the screen to help you orient your ship. You need to learn how to pitch, roll and yaw your ship, as well as use RCS (Reaction Control System) thrusters to slide the ship forward, backward, left, right, up and down.

Docking with another spaceship is particularly tricky, and requires a lot of tiny adjustments, a lot of time, and a lot of patience! (Fortunately there’s an option to speed up time, which you’ll be using a lot.)

You can also send your little green men out on EVA (a spacewalk). You’ll need to control their jetpacks to make sure they go where you want them to go, and not bump into anything. This is harder than it sounds!

While Kerbal Space Program isn’t 100% realistic by any means, it’s accurate enough to let you recreate actual space missions. This is a fantastic way for kids to appreciate some of the difficulties that real astronauts have had to face! It’s also a great jumping-off point for your child to explore real-world space travel history.

You can land people (well, Kerbals) on the Moon just like the Apollo 11 mission, or build the International Space Station piece by piece. You can even have a go at landing NASA’s Curiosity rover on Mars using a skycrane manoeuvre. 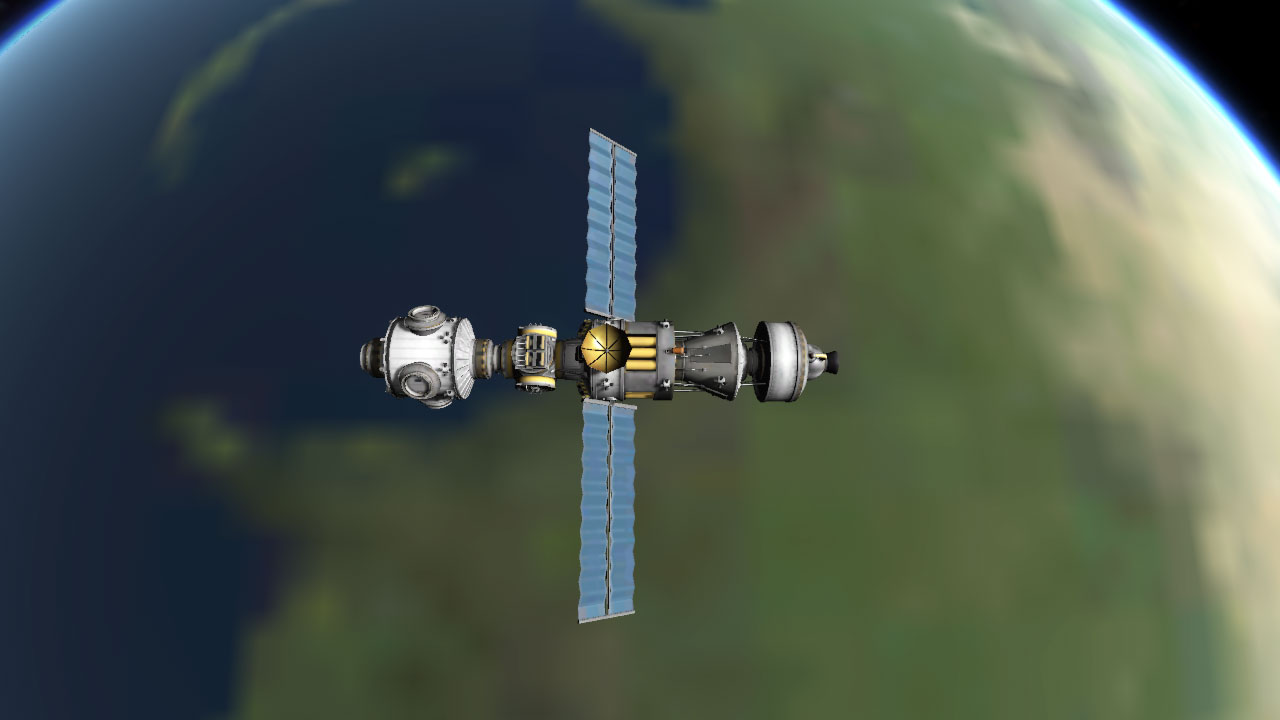 Kerbal Space Program’s Science mode gives kids an understanding of one of the main purposes of spaceflight: discovery.

In this mode, you need to perform science experiments on both the home planet (Kerbin) and other planets and moons in the star system. Once you’ve beamed an experiment’s results back to Kerbin, or returned the astronauts safely home, you get science points. You can then use these points to research new spaceship components and equipment.

The business of space

Kerbal Space Program also has a Career mode, which builds on the Science mode. As well as making new discoveries to research and build new technologies, you need to win contracts in order to get money to fund your missions. In a world where space travel increasingly involves private enterprise, the Career mode gives kids a good understanding of the business aspect of space.

Another fantastic thing about Kerbal Space Program is that it supports “addons” or “mods”  — that is, modifications to the game that add new spacecraft parts or features. There’s already a big community of mod-makers, and tons of mods to download and install.

Some of the most popular mods include:

You can find instructions on installing mods on the KSP Wiki. 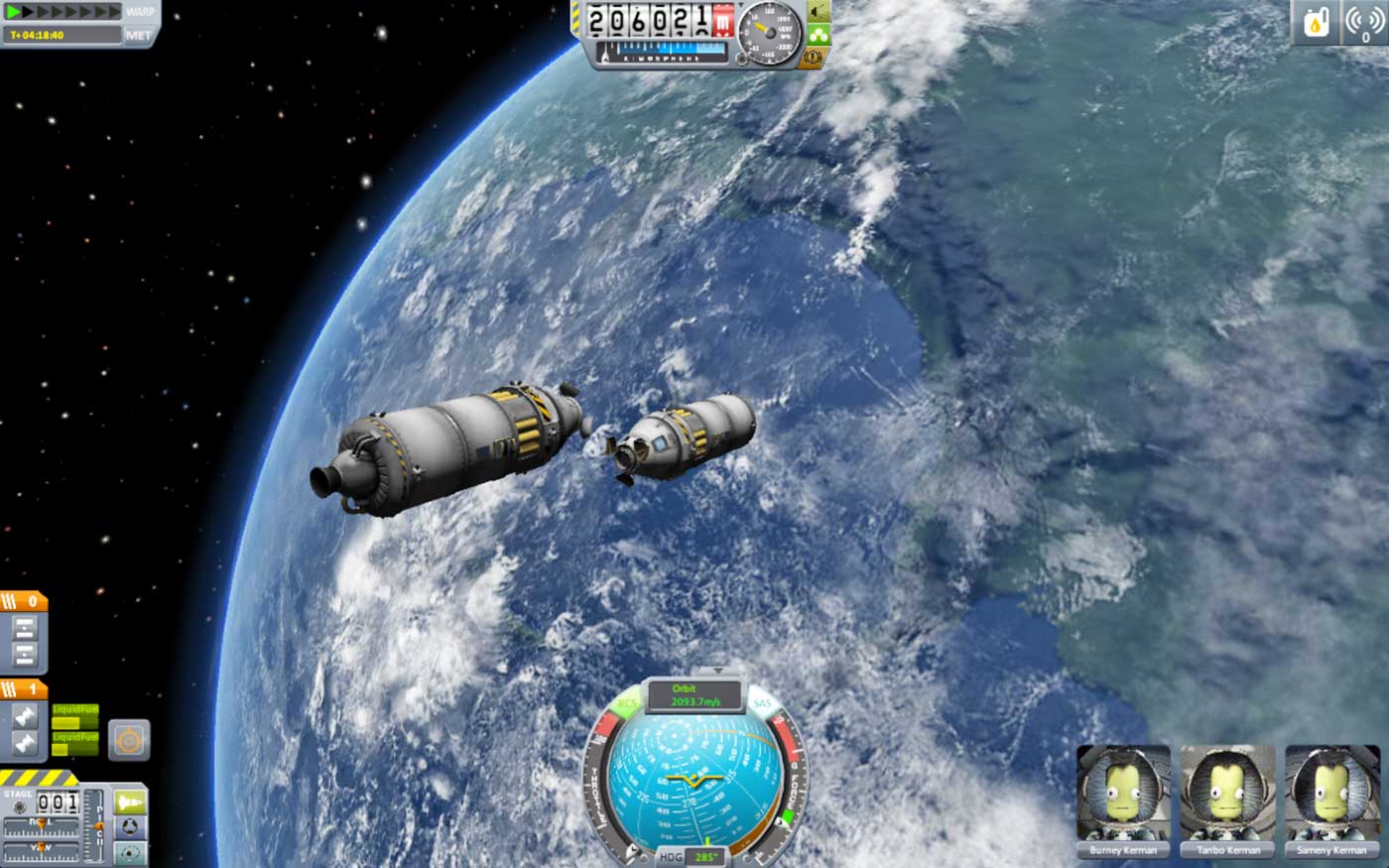 The Astronomer’s Visual Pack adds a gorgeous level of realism to the planets and scenery.

As I mentioned earlier, Kerbal Space Program is constantly evolving and improving. Some of the exciting planned features for the game include:

I hope this introduction to Kerbal Space Program has given you a good feel for this excellent game. It really is a fantastic way for kids to learn about spaceflight and improve their understanding of the laws of physics. It fuels your imagination and creativity, and it’s a lot of fun to play too!