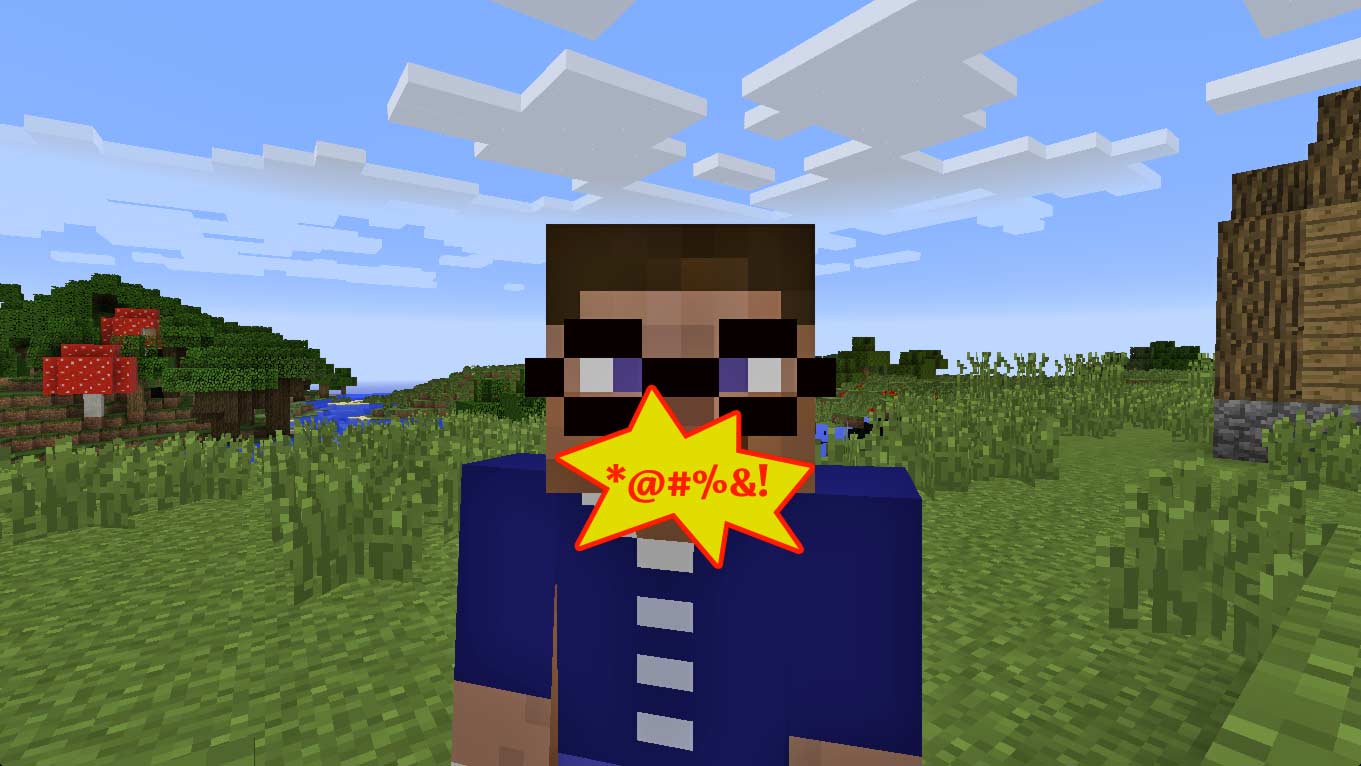 One of the main concerns parents have about Minecraft is that their kid seems irresistibly drawn to the endless supply of Minecraft “Let’s Play” videos on YouTube. These videos are very popular because they teach Minecraft playing skills and can fire the player’s imagination. They’re great for those times when you’ve run out of ideas for things to build or do.

The trouble is that some of these videos, while entertaining, contain stuff that you probably don’t want your kid seeing or hearing, such as swearing, sexual references or violence. (Believe it or not, there is now even a Grand Theft Auto Minecraft mod available, with some correspondingly unsavoury YouTube videos!)

How can you make sure that the “Let’s Play” videos your child watches are safe for them? While the public, uncensored nature of YouTube means it’s never possible to eliminate every single swear word and unsavoury moment, some YouTubers are a lot more family-friendly than others, and make an effort to keep the “grown-up” content to a minimum.

To that end, here is the Brightpips list of fun, family-friendly, non-violent, mostly non-sweary Minecraft channels! At the end of the article, you’ll also find some tips on how to keep all of your kid’s YouTube viewing as safe as possible.

Stampy — also known as stampylonghead or, if you want to be more conventional, Joseph Garrett — runs one of the most popular kid-friendly YouTube channels for Minecraft Let’s Play videos. Stampy is a firm favourite among kids, thanks to his lively, entertaining commentary and imaginative creations.

You need to be a little careful here, because Stampy did drop some F-bombs in his early “Stampy’s Lovely World” videos. However, he quickly realised that a lot of kids were following his videos, so as of Episode 19 he stopped using bad swear words, and even created a “swear chest” to keep himself honest!

Stampy is also in the process of setting up a new Minecraft educational channel, which should be worth watching. Also, Stampy’s buddy iBallisticSquid is worth checking out.

Long-running popular YouTuber paulsoaresjr produces a range of entertaining and humorous Minecraft Let’s Play video series, including Minecraft Dad, where he plays the game with his family. He also publishes Let’s Play videos for other popular games such as Terraria and Starbound. This is a great channel if you’re after fun, family-friendly Let’s Plays. Highly recommended.

There’s some mild violence and occasional naughty word when he plays multiplayer, but SethBling’s language is generally squeaky-clean!

GoodTimesWithScar creates some amazing structures in his survival world, Scarland. There’s a huge transport system, a beautifully detailed house and a lovely garden! As well as his main tutorial series, GoodTimesWithScar makes lots of other Minecraft tutorials, such as how to build a modern-looking house and a tree farm and tree house.

(Note that GoodTimesWithScar also makes a few video series on Grand Theft Auto and Call of Duty. While there generally isn’t any bad language in these series, you probably don’t want your kid watching these due to the violence in these games.)

iHasCupquake is a gamer and YouTuber who produces a range of fun, upbeat Let’s Play Minecraft series that are popular with kids. For example, Minecraft Oasis uses lots of cool Minecraft mods to create a beautiful world in which she explores, builds an amazing jungle retreat, and even raises a family! Cloud 9 Minecraft is another entertaining series in which she plays in a sky-high world with her husband.

These videos are clean, very well produced and a lot of fun to watch. She even does a Quake N Bake series where she shows how to bake game-related cake treats!

Etho’s EthosLab channel is generally pretty clean, although there is some occasional swearing in multiplayer (mostly by other players) — you might want to stay away from some of the multiplayer vids made on the MindCrack server. EthosLab features a large Let’s Play series, as well as a series of tutorials that show how to build a wide variety of redstone contraptions.

Check out the video above for a tour of Etho’s world, including his very nice house.

Thinknoodles, like Stampy, has a lot of young fans and tries hard to keep his videos clean and family-friendly. He has an upbeat, zany style and his videos are generally a lot of fun. He tends to concentrate on adventure and multiplayer maps, rather than building. Check out Minecraft: The Missing Presents (a Christmas-themed adventure map), as well as Diversity (a “complete the monument” map with lots of variety).

Generikb creates a wide variety of Minecraft Let’s Play series using a variety of mods, from the quest-driven Agrarian Skies mod through to the spooky-but-fun Attack of the B-Team modpack, which Generikb helped to produce (and which has raised tons of cash for the Child’s Play Charity to boot).

Generikb models himself after Mister Rogers, so he specifically aims to be family-friendly. Some videos — particularly the multiplayer ones — might be a bit on the violent side for younger kids, and there is the odd mild curse word, but there’s nothing too nasty here.

Last — but my no means least — kurtjmac produces a wide range of Minecraft Let’s Plays, including the legendary Far Lands or Bust, in which Kurt has, for over 3 years, been walking due west in his Minecraft world for charity! Sounds dull, but his commentary is what makes it work.

Kurt also commentates on other kid-friendly games such as the excellent Kerbal Space Program.

Apart from seeking out family-friendly channels and playlists, what else can you do to keep YouTube safe for your child? Here are some tips:

YouTube’s Safety Mode lets you filter out most inappropriate videos from searches and suggestions.

I hope this article has given you some options to help your kid learn about Minecraft in a safe, fun way on YouTube. Do you have any other ideas for kid-friendly YouTube watching? Please let me know in the comments below.

Does your kid like to play Minecraft online, or would they like to start playing online? If so, don’t miss my article on family-friendly Minecraft servers! It’s packed with a great list of servers, along with tips for staying safe online.